The key to resolving the Middle East crisis and defeating extremism fueled by the ayatollahs is regime change and establishing democracy in Iran, Iranian opposition leader emphasized.

Iranian Resistance President-elect Maryam Rajavi, joined by 70 Members of the French National Assembly called on Paris to condition improved relations with Tehran on the regime taking real steps in improving the human rights situation across Iran.

Iran is exporting terrorism, fundamentalism and extremism and driving the entire Middle East into the abyss of an all-out war, Rajavi asserted, adding systematic and ross human rights violations in Iran is also a policy continued for nearly four decades by Tehran. The entire region is in desperate need of peace and tranquility, only made possible by regime change in Iran, she added, explaining the key to such endeavors is actually in the hands of the Iranian people and their organized resistance. 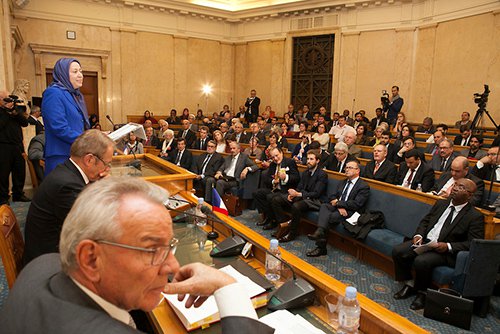 The French Parliamentary Committee for a Democratic Iran, chaired by French National Assembly Member Dominique Lefebvre, sponsored the conference, with a number of deputies joining their ranks.

The Committee used the opportunity to announce a joint call made by 70 National Assembly deputies from various political parties to Paris to condition any and all diplomatic/economic relations with Iran on certain subjects: improving human rights, halting executions, releasing all political prisoners and respecting democratic freedoms for all people in Iran.

A democratic Iran is the key obligatory to establish stability across the Middle East, the signatories emphasized, and adding Rajavi’s 10-point plan for a democratic, non-nuclear Iran founded on the separation of religion and state, alongside equality for women should enjoy the support of the international community.

In her speech Rajavi referred to the recent remarks made by former Iranian president Hashemi Rafsanjani on launching Iran’s nuclear program with the ambitions of obtaining the atomic bomb.

The nuclear project was personally followed up by himself and Khamenei, he added, going on to say Tehran had no choice but to succumb to the nuclear pact signed in Vienna. Therefore, this explains why the ayatollahs have adopted a much more aggressive policy to reimburse for their retreat from approximately all of Khamenei’s so-called red lines.

The horrific increase in the number of executions, escalating warmongering in Syria and the continuing siege and crackdown of Iranian refugees housed in Camp Liberty near Baghdad International Airport are further proof to this end.

Many in the West believe the ayatollahs’ aggressions and hostility emanates from their power, Rajavi explained, adding they seek to involve Tehran in resolving Middle East crises while Iran itself is completely behind this inferno that has engulfed the entire region. Iran’s comprehensive support for Assad and Maliki prepared the grounds for the rise of ISIS, victimized 300,000 Syrians and launched the recent wave of refugees swarming into Europe.

Turning a blind-eye to Tehran’s meddling in the Middle East must come to an end, Rajavi emphasized. The solution lies in evicting Iran’s Revolutionary Guards and providing concrete support to the Syrian opposition to establish a state in Syria without Bashar Assad.

Iran’s opposition leader finished her remarks by calling on the international community, especially the European Union and the United States, to live up to their pledges on protecting Camp Liberty and bringing an end to the inhumane blockade.