Khamenei said the Revolutionary Guards are the linchpin and main guarantor for survival of religious fascism ruling Iran.

Given recent events, Khamenei is apprehensive about the regime’s prospects. Khamenei knows the Iranian people hold a bitter hatred towards the IRGC, and he acknowledged that even some within the regime hate the revolutionary guards.

“They promise that the Iran of 10 years from now will not be this Iran. We should not allow this thought and evil hope to grow in the enemy’s heart. We should greatly strengthen the pillars of the revolution and the revolutionary mindset. All should value the IRGC. Weakening the revolutionary guards and irrelevant statements against it are groundless and please the enemy. IRGC is a great divine gift in the country.” – Khamenei

Khamenei’s describes the Islamic Revolutionary Guards Corps as a “great divine gift,” but he is obviously worried the hardline regime is losing it’s remaining affiliations.

Khamenei continued: “Economic and security influence is of course dangerous and has significant consequences, but the enemy’s political and cultural influence is a much greater threat and everyone needs to be watchful. … They are waiting for the nation and the system to become inattentive and ten years from now that for example I am no longer around they would attain their objectives.” 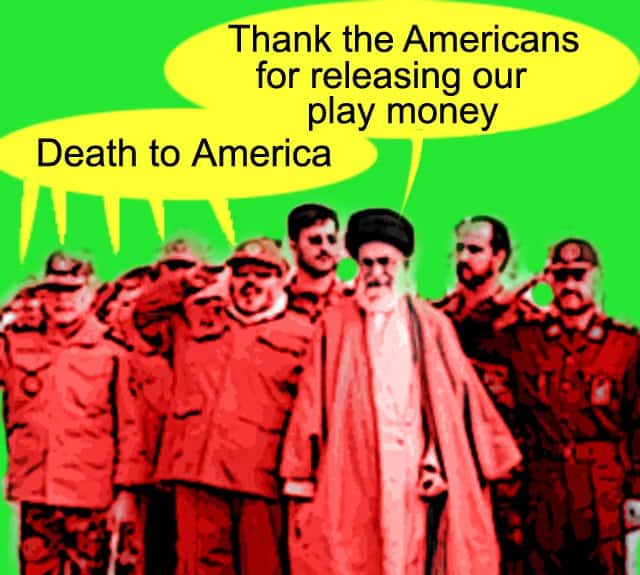 Khamenei, rather than being a religious leader, is really a warmonger. He praised warmongering, he praised terrorism and he praised the aggressive interventions in various countries the Islamic Revolutionary Guards Corps undertake.

Khamenei describes the Corps’ warmongering as “creation of operational, political, identity and pompous capability.” He says IRGC intelligence should observe issues and identify threats to the regime. Those threats would be internal as well as external.

IRGC commander Major General Jafari sent a message to IRGC leaders in the Khorassan state daily, on September 16, 2015. He said “IRGC believes that to confront enemies’ fresh pretexts, in tandem with increasing the capability and precision of its missiles, it should increase the range of Islamic ideals and care for the symbols needed for the revolution.”

Many in the west think Rouhani is a moderate, but his own words show he is not. On September 15, Rouhani spoke to IRGC leaders,encouraging the continuation of aggressive interventions and regional warmongering. He said, “We cannot be indifferent regarding Muslim countries.”

Iran’s clerical regime is known to be a major source of regional massacres, conflict and crisis, yet the supposed moderate Rouhani said “We are the great soldiers that create tranquility, stability and peace not just in Iran, but in the whole region for our neighbors, for Muslim unity and for unifying Muslims that would give our enemy the shivers.”

Rouhani assured his IRGC audience that their plundering would continue, and probably to prepare for more sanctions. The Iran State News Network said he asked “the revolutionary guards and the Basij to prop up the government in attaining the goals of a resistive economy and to arrive at a point of invulnerability for the country’s economy.”

At the behest of supreme leader Khamenei, Revolutionary Guards’ has dominated over Iran’s economy. The IRGC is stealing billions through crackdown and plundering means.

Voice of America TV, April 24, 2015 reported: “Based on evaluations conducted on companies belonging to the Revolutionary Guards and having stocks in Iran’s stock market, the Khatam al-Anbia Base and its affiliated companies have had their values reach around $67bn from 2006 to this day. More than 50% of the stocks of the Iran Communications Company; North Digging Company; Isfahan Refinery and Oil Products Distribution Company; Iran Aluminum Company (the real estate owned by this company around the city of Arak is worth over $100 million); Zanjan Anguran Lead and Zinc Mine; stocks of the Export, Trade, Mellat and Pasargad banks; Bank Sina worth over $830 million; Middle East Water; trustee of over 60% of the country’s imports and exports; Isfahan Mobarake Steel Company; Tabriz Tractor Manufacturing Company; Iran Central Mines; Jaberin Hayan Pharmaceuticals; Industrial Bread factories in over 20 provinces across the country; 40% of the Pars Petrochemical Company worth over $230 million; Pars Air Services; Maede Food Industries; 20% of Saipa and Iran Khodrow companies; the IRGC controls nearly all dam construction and oil/gas industries projects; a total of 12,800 government projects are controlled by the IRGC, of which $25bn is the value of the oil projects alone; the IRGC Cooperation Project has launched many tower building projects in Tehran’s District 22; the IRGC has 212 illegal piers; Bank Ansar, belonging to the IRGC, was established in 2006 and it currently has 740 branches.”

Many poor people in Iran sell body parts to survive, and it is obvious from the words and actions of top regime officials, that the regime’s main objective of agreeing to the nuclear accord was not to help the people or to restore the country’s economy.

The top priority for both Khamenei and Rouhani is to ensure their own survival and to expand their influence.

They aim to achieve their survival and prosperity through continued domestic suppression and export of terrorism.

With the faulty nuclear accord in place, the West must remain alert, because much of the massive influx of funds reaching Iran due to sanctions relief will be channeled into expansion of terrorism throughout the Middle East region.