Tehran lobbies, and apologists have recently been hard at work to use fictitious ” hypothesise,” ruled out by factualists in the “real” events of Iranian uprising and its follow ups.

A round table of disillusioned pundits who try to imitate Gobble, master propagandist of the Nazi regime, forget that we live in the era of Democratic Gales, which judge mostly on “Deeds” and not “disenchanted absurd words and accusations.”

I never encountered “Bassiji” pundits in suits and cravats before escaping Iran. Reading accusations and absurdities in a wave of slanders targeting Iran’s main capable opposition (MEK) that has practically withstood ten-time more such follies by the mullahs, was history for me.

The bundle is composed of NIAC -the dis-reputed Trita Parsi1 – and his chain of corporate. What surprised me is the extent these hypocrites undermine and insult the intellect of the people overall and specifically, Policy makers in Washington.

One recent example of such an article written in the same line reads:

“But the delisting of the MEK, Iran experts say, could benefit Iran’s hard-line rulers by giving them more reason to brutally clamp down on Iran’s internal, nonviolent opposition. The Green Movement – which led street protests in 2009 – steadfastly rejects the MEK as an anti-democratic and violent force.”31Iranian group’s big-money push to get off US terrorist list- Scott Peterson

“Iran Experts” in the article no doubt is referring to Joint Experts’ Statement on the Mujahedin-e Khalq.

It is interesting to note that the “Experts” is referring to none other than Bassiji White tie elements at work in Capitol Hill and lame rejected by the young movement in Iran as a pundit of the fascist regime.Apologists such as Limbert, with a clear prospect of “profitable” *2 cooperation with the Iranian regime, are not the Iranian people’s voice and conscience to denounce a 43 year old pro-democracy movement.

Chiming with Iranian Intelligence 34 year-long motto portraying the PMOI/MEK, which is the only serious threat to the malicious mullahs in Iran, as being anti-democratic and violent is immensely repetitious.

The 7 court ruling in Europe and the last in France have ruled these persecutive accusations as “” perverse.” The French Judge, Mr.Trevidic went further than that and recognized;

“A Law of a Democratic country, on terrorism, cannot have the intention to obstruct the constitutional right of resistance against oppression.”

Activism of the PMOI(MEK) reflect the natural and inalienable right to resist tyranny, as stated in section 2 of the Declaration of Human Rights, and as correctly pointed out by former Mayor of New York, Rudii Giuliani;

“How can it be terrorism to support Freedom of Religion, freedom for women, a free election, a rule of Law and nuclear-free Iran?!”

MEK (PMOI) is not a terrorist organization. It is a voice and a call for freedom – Tom Ridge, first U.S. Homeland Security Secretary *5

WE, the Iranian people, have seen 150 years of smear campaign by tyrants against its Freedom fighters and dissidents. We have always appreciated those individuals who have embodied the true values of their homeland and stood by us during our worst movements. 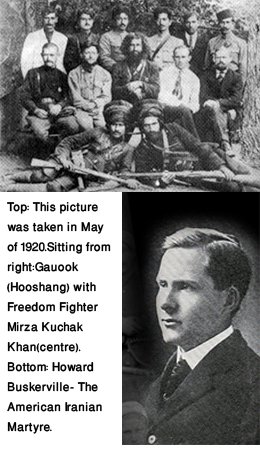 We have seen the brave Howard Baskerville, an American teacher, who came to the aid of Sattar Khan during the Constitutional Revolution6 and fought alongside him and died as a “freedom Fighter.” People still flower his grave in Tabriz and revere his role in aiding the movement.

Gauook, from the people of Germany, came to the aid of Mirza Kouchak Khan.

The long line of individuals from countries worldwide, standing with the Iranian resistance(MEK) in its plight for Freedom has convinced the clerical regime and its apologists of the vital role the MEK plays in Iran and the region.

Dedication and commitment towards democracy, justice, and law in the contemporary world has been a characteristic of individuals who are now protecting genuine values of their American Pride Abraham Lincoln and Thomas Jefferson by standing with the Iranian resistance.

Accusing such elegance of values lined to defend usurped rights of a people for FREEDOM, is venomous and absurd. This is a never-ending line that will take down the tyrants in Tehran.

The virtue of risk taking for the defence of Freedom is not purchasable since it involves unwavered perseverance to defend genuine values bypassing short-term interests.

We have seen the American pride symbolized in heroes such as George Washington, and Abraham Lincoln, and read about Colonel Francis Marion the fearless cavalryman, leading South Carolinians to victory in the American Revolution.

Today, the “Line” has begun in Europe with more than 4000 politicians, 8000 Mayors, 3400 Jurists worldwide and scores of Humanists and Right defenders and has continued to reach the United States.

These Noble individuals are cherished and loved by the Iranian people and represent their expectations of the ” American democracy.”