80th Day Of Hungerstrike: Serious Consequences, Obligation Of US Government

In this era of the mass media and instantaneous communication, we can not only receive 24 hour news reporting, have access to the internet for information, research and opinion, but also interact with and contribute to this amazing world wide web in ways that give the ordinary citizen as well as governments and other large organisations, the power to make an impact for good or evil in the world.

It might therefore be surprising if not shocking to many, that there are currently crimes against humanity being perpetrated with the full knowledge of the powers that be in the international community, including not least the United Nations, the USA and the UK, that have been mainly hidden from the public at large.

The most recent of these is the massacre, on 1st September, of 52 Iranian dissident refugees living in Iraq, by Iraqi security forces at the behest of the Iranian Mullahs. This was only the most recent in a series of such fatal attacks and almost certainly to be followed by further atrocities against the 3000+ remaining Iranian dissidents detained at a prison Camp perversely named ‘Liberty’. Most urgently now, 7 hostages have been taken, 6 women and 1 man, and are being held in Iraq probably being tortured and facing forcible return to Iran where they will face torture and execution. What is most shocking is that every one of these individuals and all their compatriots in Camp Liberty are protected persons under the 4th Geneva Convention.

“This is a humanitarian crisis that calls out for resolution.” –

“This is an embarrassment. This is a stain on the reputation of the United States.”

“If we are truly grateful we will help those who are struggling against injustice and tyranny.” – Rep. Dana Rohrabache

Notwithstanding the amazing power of mass communication and the World Wide Web, and the untiring efforts of communities of exiled Iranians throughout the world, together with their local supporters, the public at large remains blissfully unaware of what is actually happening. It is therefore in absolute desperation and because these brave people who wish only for a free, democratic, non theocratic, non nuclear Iran and who refuse to resort to more violent tactics, that there are now numerous of their members who are on hunger strike in capitals around the world. They have been surviving on only tea and sugar lumps for over 6 weeks and their health is deteriorating rapidly. They are determined to continue, no matter what, until the release of the seven hostages has been secured. They are prepared to sacrifice their health and their lives. 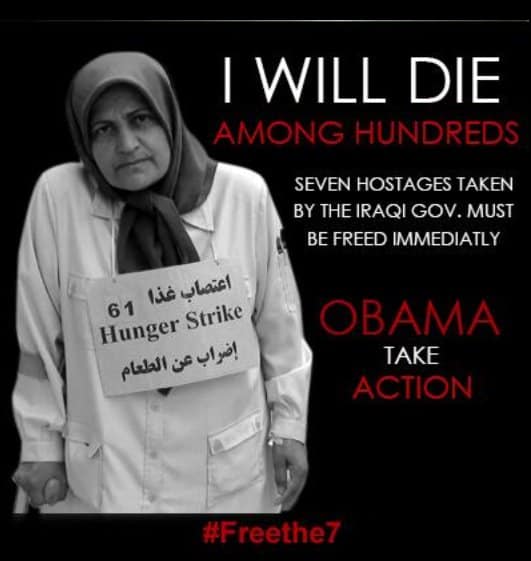 The US and UK have enough leverage in Iraq to achieve the release of the hostages, but are resolutely refusing to do anything more than uttering a few empty words of condemnation.

As a British supporter of the Iranian Resistance movement, I experience the incredible patience, kindness, perseverance and bravery, in the face of appalling persecution and propaganda, of the Iranians I have met, which are campaigning for peaceful democratic change in their country and for the protection of their friends and family members in Iraq. On the other hand, I have also borne witness to the hypocritical and cowardly policies of the leaders of the so-called civilised world, and the evil of brutal dictators who torture and execute their own citizens for being members of opposition groups or for being associated with them in any way.

I am compelled to do whatever I am able, however powerless I feel, to help shine a spotlight on this, primarily at this time, to bring about the end to the hunger strike that would follow the release of the hostages.

Shahabeh is daughter to one of the six women , who were abducted from Camp Liberty on September 1 this year in a vicious attack in which 52 defenceless residents who were supposed to be protected by the US-UN were executed on hospital beds or while handcuffed. She has been asking 1 each and every one of us for help.

The media as a whole have until now failed to bring this to the attention of the British public, but there are now just a few journalists who are recognising the importance of this issue. Time is rapidly running out though and we need many good, ordinary people to put pressure on our government to do the right thing.

According to the quote often attributed to the British Statesman, Edmund Burke, back in the 18th century: “The only thing necessary for the triumph of evil is for good men to do nothing.”