With Somali Football family still in shock and sadness, football referees from across the country have on Wednesday sat for five day-long FIFA level MA refereeing course in the brother nation of Djibouti. A colourful opening ceremony has been held at the Djibouti FA technical centre where the course will be under way until it ends on the 22nd of April.

The opening ceremony started with praying for the former SFF president Said Mahmoud Nur and former Somali NOC president Aden Hajji Yeberow Wiish who were killed in a suicide attack in Mogadishu earlier in the month. 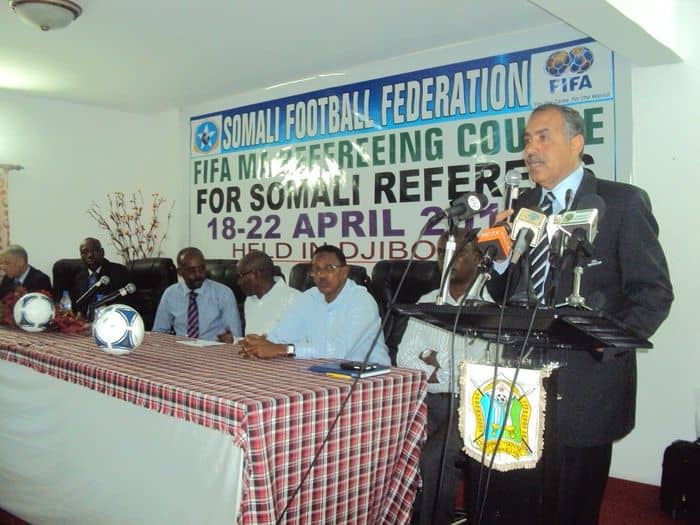 Somali Football Federation secretary General Abdi Qani Said Arab who first addressed at the opening ceremony thanked the government, people and the football Federation of Djibouti for their precious hospitality and hosting of all Somali courses and home games in their territory.

“Somalia is very much grateful to FIFA who always allowed us to hold our courses and home games where ever we want and this is the country we have preferred because it is our second home land” the Secretary General told the ceremony adding that FIFA had paid great efforts and money to help Somalia football work despite lawlessness and lack of a functioning government in Somalia for more than two decades” the secretary General emphasized. 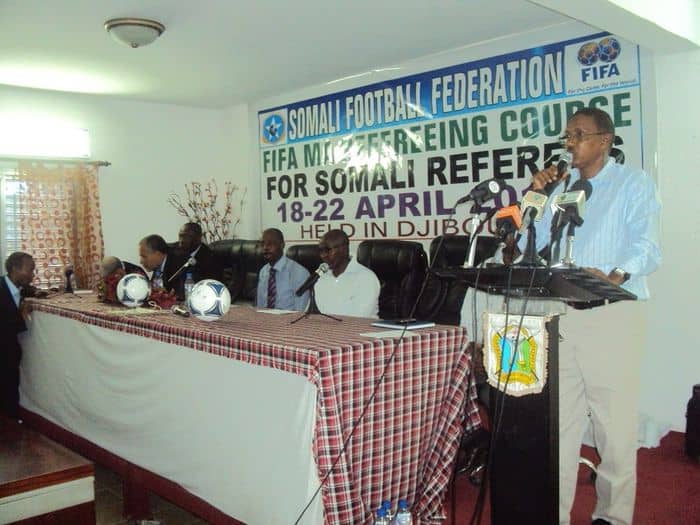 “On behalf of Somali Football family I announce here in front of you that Somalia was very grateful to the world of sport for sharing with us the sadness over the deaths of our beloved colleagues” he noted adding that the world sport from FIFA, CAF and IOC to the regional body of CECAFA have all showed solidarity with Somalia in all difficulties.

He praised the FIFA instructors and the Cairo RDO officer for coming to teach Somalia for the second time. “The FIFA instructors are not new to us, they have been here with in March 2010-we hope them to be with us during our future courses too” he said adding that his federation was very happy to see such high profile instructors teaching Somali referees again. 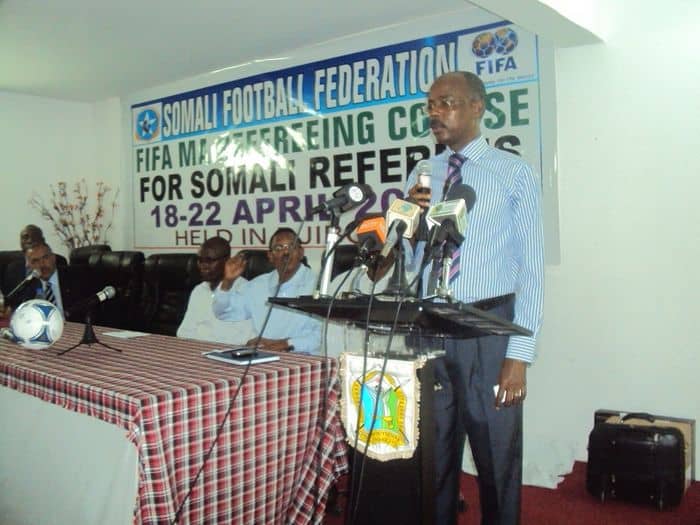 FIFA RDO officer in Cairo Ahmed El Shenawi on the behalf of FIFA praised the Djibouti Football Federation for always hosting the Somali courses in its country without any preconditions. “This shows that the bilateral cooperation between the two federations had already grown enough” El Shenawi told the opening ceremony.

He said that FIFA and Somali Football federation had spent much time, energy and money to the implementation of the course as part of the FIFA refereeing development program. 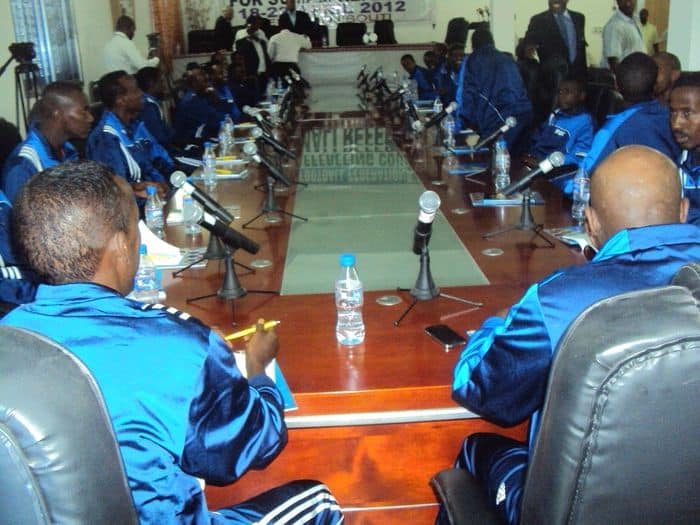 “You arrived from your home to learn and who ever looks for learning will once arrive to the top, so I am encouraging you to do more efforts to reach the highest level as referees-we really appreciate to come to you once again and your authorities told you appreciate us too” El Shenawi added.” Next year we hope to give you the course in Mogadishu if Allah wills” he said.

The president of Djibouti Football Federation Hussein Fadoul Dabar noted that his federation follows behind the footsteps of Djibouti president Ismail Omar Guelleh who spends most of his time in helping his Somali brothers and looking for lasting peace to the war-devastated nation. 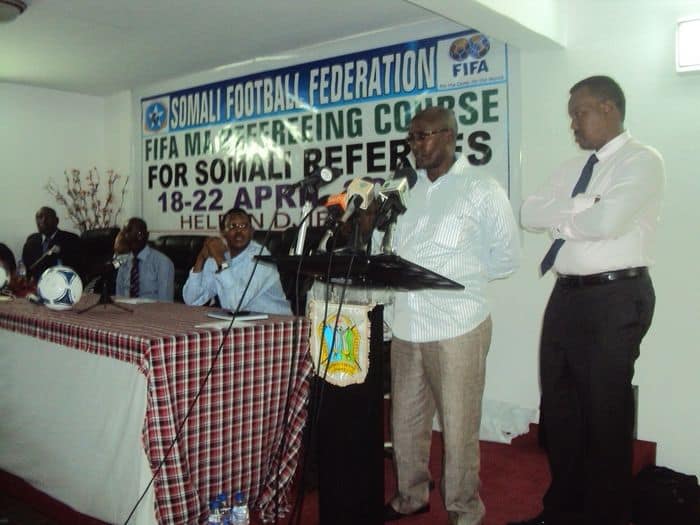 “I think we did nothing for you, because here is your second country and we are fulfilling our duties-feel here as Mogadishu, come and do all you want here” president Hussein Fadoul emphasized. 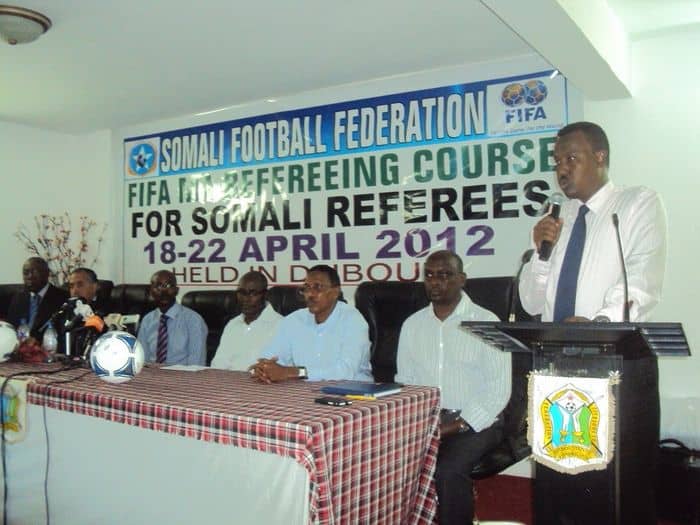 “The real brother is that shows solidarity with you during hard times” he said thanking the Djibouti FA for the constant hospitality and FIFA for the continuous support to Somalia.

Somalia’s acting ambassador to Djibouti Abdirahman Mohamed Hirabe told the opening ceremony that since April 4 tragedy the government and Football Federation officials in Djibouti have been showing solidarity with his diplomatic mission and were all saddened with the death of Somali sporting officials.

“As I witnessed here in Djibouti everyone was shocked by the sudden death of our colleagues so what I can tell you is that the whole city of Djibouti was mourning for days as Mogadishu did” the acting ambassador noted before announcing the course was open.

FIFA instructor Joseph wellington and FIFA fitness instructor Boubakar Hannachi are conducting at the course while FIFA RDO officer in Cairo Ahmed El Shenawi is inspecting how the course is being implemented.