The Somali Community in London held a colorful farewell dinner ceremony for the Somali Olympic delegation to say good bye and wish them safe return, before traveling back to Mogadishu next week. The Saturday evening farewell ceremony comes as Somalia’s two athletes Zamzam and Mohamed were eliminated in the first round of their events on Friday.

Even though Somalia was one of the early eliminated countries, the British born of Somali origin Mo Farah’s win in the 10000M race was a very cheerful moment for the Somali Olympic leaders and the entire Somali community. The issue overshadowed the farewell dinner ceremony for the Somali Olympic team held in north London on Saturday evening. 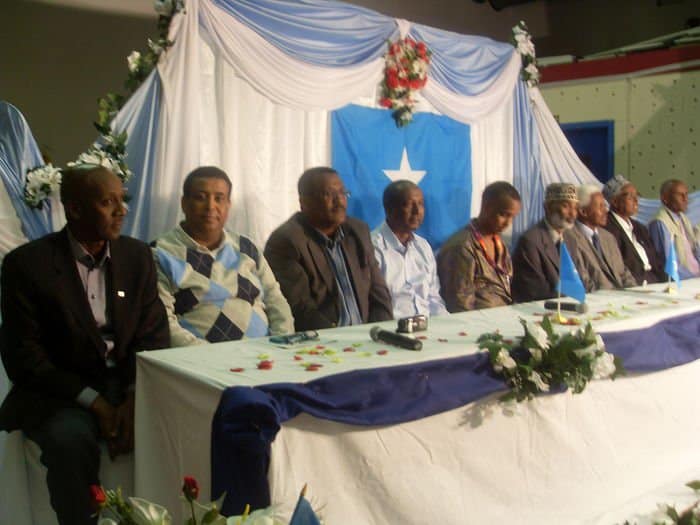 “This ceremony was mainly intended to encourage and wish well for the Zamzam and Mohamed – they didn’t win a medal, but they really did well, as the flag of Somalia waved over the international event,” former Somali national men’s basketball team maker Ahmed Nur Hashi (Seyga Ruushka) told the ceremony.

Somali law expert Hussein Dirie added that Olympics means to bring a nation’s flag among the world flags. “We wanted to accumulate medals, but if we missed, the other big achievement we gained is that our flag bearers marched with their counterparts from strong nations like the USA, Britain, Russia and China while Somalia was undergoing the most notorious civil wars in the world for the past two decades,” Dirie told the ceremony.

“It was really something very mentionable that Somalia is at the international Olympic gathering and shares with the rest of the world despite experiencing more than 22 years of daily bloodshed,” veteran politician Salad Osman Rooble added.

He called on Somali government to give a great priority to the development of sport in the country. “I urge Somali government to prioritise sport in schools, because we know that schools are an important basement for the promotion of sport,” the politician noted during his address at the farewell dinner ceremony Saturday evening.

Mohamed Buube Mohiyadin, a former Somali footballer who currently has businesses in London urged Somalis in UK and elsewhere abroad to sponsor sport in homeland.

“Only in UK there are hundreds of thousands of Somalis and we have companies and NGOs – if we stand for sponsoring our sport, I am sure that in the next four years we can produce scores of talented players who may have scored tangible victories for Somalia in the next Olympic games to be held in Brazil,” Buube emphasized in his address.

“It is right that together we can hold up the flag and gain successes in the next Olympics or other international events – let us make joint efforts in a bid to regain Somalia’s lost publicity in world sport,” added Abdulkader Isoomareey.

Somali Olympic delegation chef de mission and NOC executive committee member Omar Abdulkader Baarajab told the ceremony that in the next Olympics Somalia is very hopeful to achieve medals calling on Somalis to work hard on the stabilization of the country in a bid to get a safer territory that athletes can train freely with no fear from militants.

Somali National Olympic committee secretary General Abdullahi Ahmed Tarabi added that he was very grateful to the members of the Somali community in London for the great responsibilities they have embraced.

President of the National Olympic committee of Somalia Duran Ahmed Farah said that the successive welcome and farewell ceremonies for the delegation show that Somalis are committed to working for their homeland.

“I am sure that good things have been done for the past week, Somalia was among the 204 IOC-member nations whose flags waved over the Olympic village, that was a very successful experience, but something is not yet over, a long and hard way is ahead of us – I mean that we are all wanted to unite our forces to achieve medals in the years to come,” Somali NOC president Duran Ahmed Farah told the ceremony.

On behalf of Somali Olympics, the president sent congratulations to Mo Farah for his historic win in the 10000M race in the 2012 world Olympics in London. “Although he is carrying a separate flag Mo Farah is a Somali and we are all happy with his success,” the president added.

Saturday evening farewell ceremony for the Somali Olympic delegation was described as the most ‘colorful’ since Somalia arrived in London on the 18th of July.