Somali Football has on Wednesday launched a two-day sports medicine workshop for medical university students, hospital nurses and volunteers from Somali Red Crescent society in a bid to increase the quality and quantity of its own professional sports medicine volunteers across the football growing country.

Somali Football Federation Secretary General Abdi Qani Said Arab who addressed at Wednesday’s opening ceremony of the sports medicine workshop noted that the event was the most professional ever held by his federation and was intended to strengthen the role of sports medicine volunteers and increase the number of sports medical staff who will be assigned to the field of football. 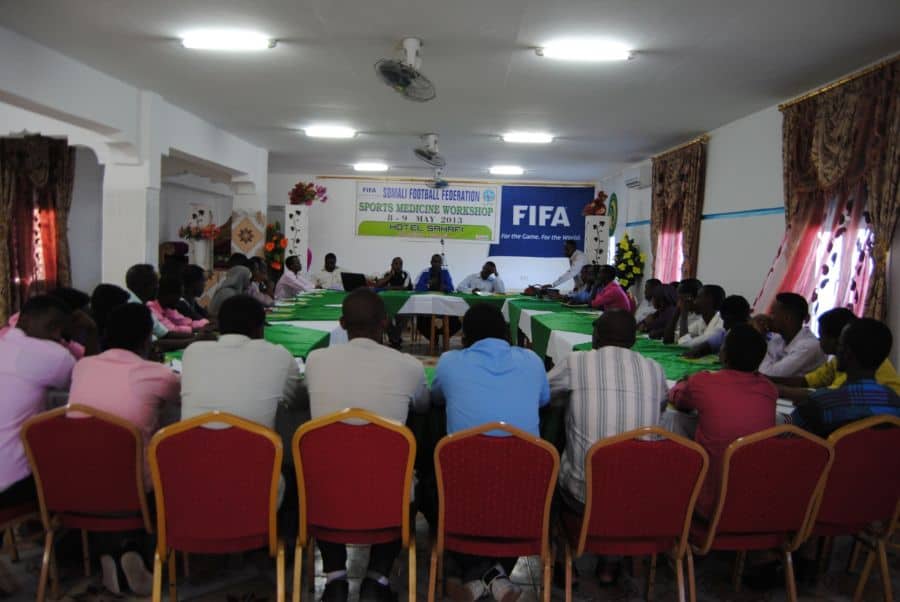 “We previously held at least one sports medicine workshop annually, but this is totally different from those we held in the past, because it gathered young age volunteers from medical universities in the country, nurses from the country’s biggest hospitals and as well as local Red Crescent volunteers, so it is more professional than we held before,” the SFF secretary General told the 45 workshop participants including men and women during his opening remarks Wednesday.

He noted it was very important for the Somali Football Federation to organize such professional workshop adding that the SFF had more crucial objectives in holding the event which include: 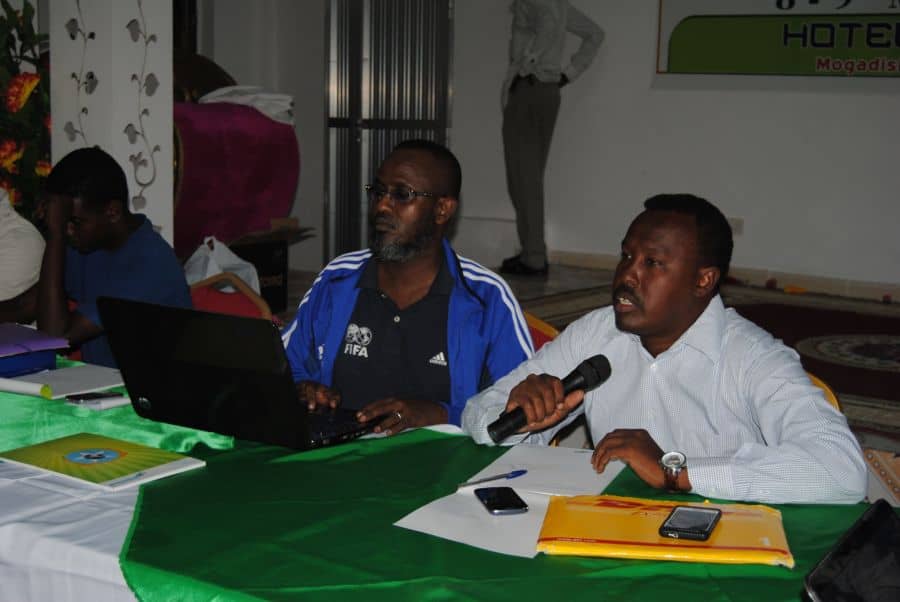 2- To send medical messages to the Somali people through football

3- To help accomplish the international principles of sports medicine and spread the medical messages from FIFA medical committee in particularly the messages delivered at the FIFA medical congresses held In Zurich 2010 and in Budapest 2012 where Somali FA was represented by its volunteer doctors.

4- To update the Somali FA medical volunteers and help them fully practice the important FIFA medical committee messages including the implementation of FIFA 11+ and F-Marc programs. 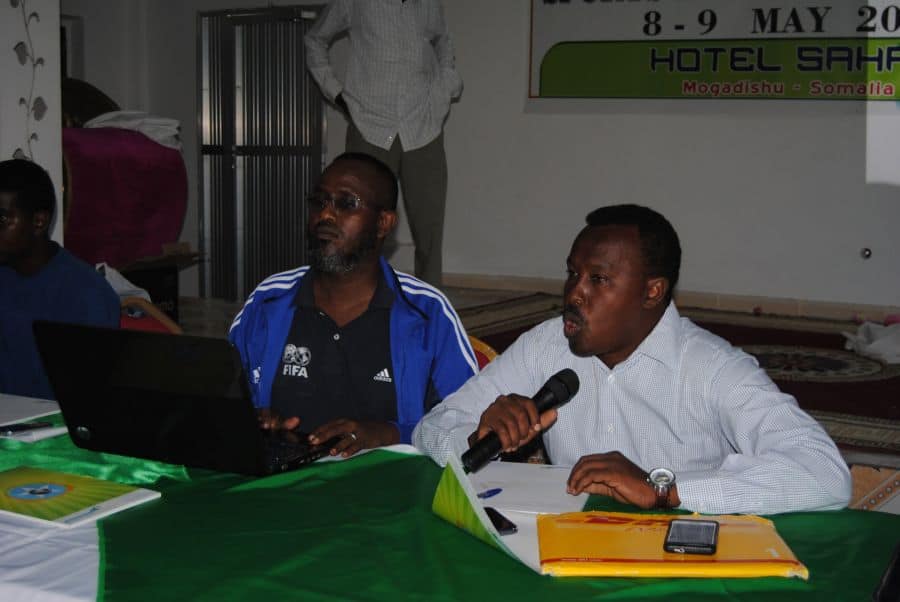 Secretary General Abdi Qani Said Arab indicated that for a period of two years the Somali Football Federation has been working on the successful implementation of such professional medicine workshop. Other basic sports medicine workshops were held in the country, but this is the most professional event ever organized in the war-devastated country.

During his opening remarks Secretary General Abdi Qani Said Arab emphasised the importance of anti doping control awareness through football courses adding that the SFF was giving much more priority to the anti- doping control implementation.

He noted that the workshop was part of the preparations for the upcoming FIFA level sports medicine workshop which is expected to be organized in the capital Mogadishu in a few months time. 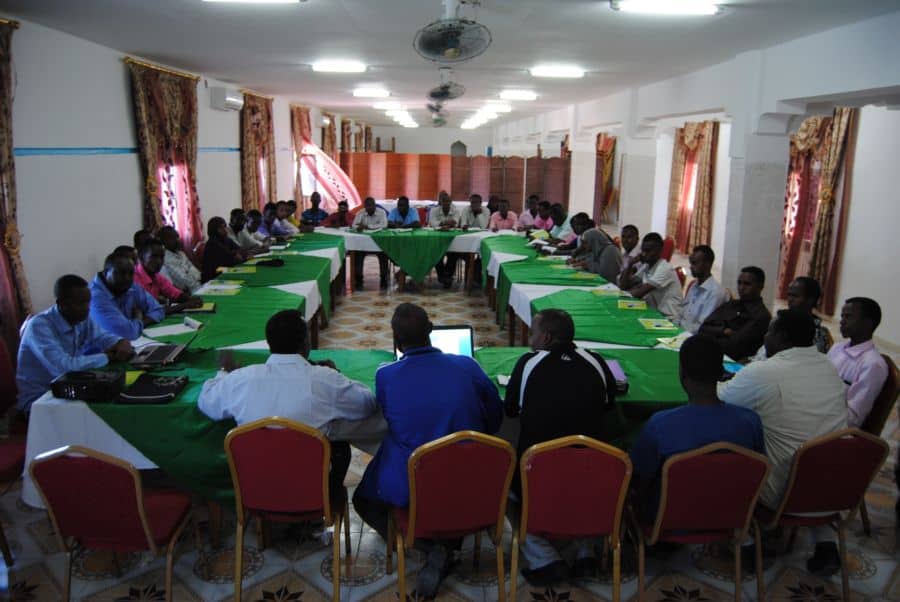 “For the first time we are going to organize at least three FIFA level courses in the country before the end of the year and those courses will include the medical one, so we want you to be fully prepared for that international level course-it will really be a very big chance,” Secretary General Abdi Qani Said Arab told the workshop participants adding that after the course there will be an examination and the most qualified 25 participants will be shortlisted for the upcoming FIFA level medical course.

He said the trained medical volunteers will work at the local football activities and will also help the local clubs during training sessions and other purposes.

In his opening remarks Secretary General Abdi Qani Said Arab told the workshop participants that the SFF was in the process of establishing its own professional ambulance service since there was a huge need for such service. 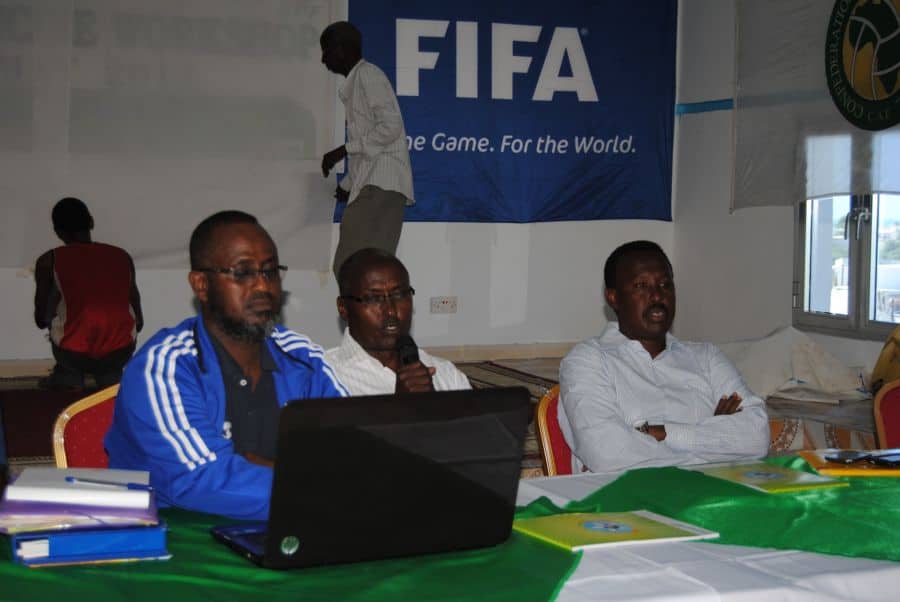 “On behalf of Somali Football Federation I promise that we will continue such sports medicine workshops and we will get you full medical equipment including emergency ambulance services-we will try to cover your medical needs as much as we can,” Secretary General Abdi Qani Said Arab told the volunteers.

For his part Somali Football Federation President Ali Said Guled Roble told the opening ceremony that his federation was prioritising the strengthening of the sector of sports medicine and SFF will increase the organization of such workshops.

“I praise the work by our medical committee members who are always spending much of their time and energy in creating new volunteers-in my capacity as president I confirm that you are the backbone of all of our activities, because without medical volunteers we cannot continue,” President Ali Said Guled Roble told the workshop instructors before officially opening it.

The two-day workshop is being conducted by Dr. Abdullahi Hussein one of the country’s most professional surgeons and general medical doctor who had previously benefitted from many FIFA and CAF medical seminars and courses. He is assisted by General medical doctor and orthopaedist Dr. Khalif Yusuf Sabriye, both members of Somali Football Federation Medical committee.