The sudden death of president Said Mahmoud Nur has vehemently shocked the whole members of Somali Football family who experienced the blackest day in history when the sad news of the president’s death has come to light on Wednesday, according to Somali Football Federation Secretary General Abdi Qani Said Arab who issued press statement later on the day.

The secretary General’s statement said that the late president was among many community leaders who were invited to a ceremony marking on the first anniversary of the revival of Somali National Television which was being held at the Somali national theatre when a female suicide bomber blew herself up next to the SFF president who suddenly died on the spot. 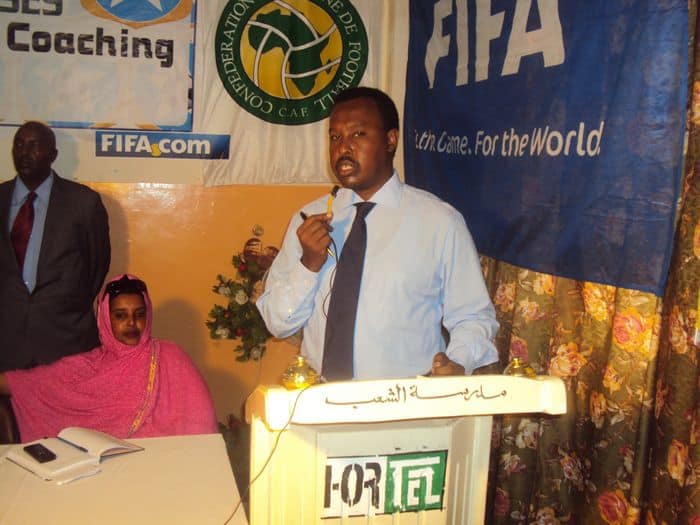 According to SFF, the unexpected death of the Somali National Olympic committee president Aden Hajji Yeberow who accompanied the SFF boss was a big loss for the whole members of Somali sports family.

“Today is a black day for Somali sports, as we have lost precious friends who spent more time and energy in developing Somali sport,” said Somali Football Federation secretary General Abdi Qani Said Arab who on behalf of Somali Football family sent a heart-felt condolence and sympathy to the families, wives and children of the slain Somali sporting leaders.

SFF secretary General announced that three days of mourning will be dedicated for the slain colleagues. He added that the book of condolence has been opened at the SFF headquarters where thousands have signed to offer their sympathy since Wednesday afternoon.

The Al-Qaeda in the east Africa (Al-Shabaab) have claimed for the responsibility of the suicide attack which also killed three other people and wounded 15 others including 8 journalists, 4 lawmakers and a female basketball player.