In the joint operation with the government of The Gambia the Sea Shepherd crew worked with law enforcement agents to arrest two industrial trawlers for multiple fisheries offenses.

Sea Shepherd’s partnership with The Gambia is known as Operation Gambian Coastal Defense.

The collaboration resulted in the arrest of fishing vessels Lao Yuan Yu 010 and Victory 205 on August 27th. They were charged with fishing without a fishing log book and fishing within The Gambia’s nine-nautical mile Special Management Area reserved for artisanal fishermen and other offences.

The biodiverse waters of The Gambia lie where the nutrient-rich Gambia River meets the Canary Current, and more than 200,000 Gambians depend on local fisheries. 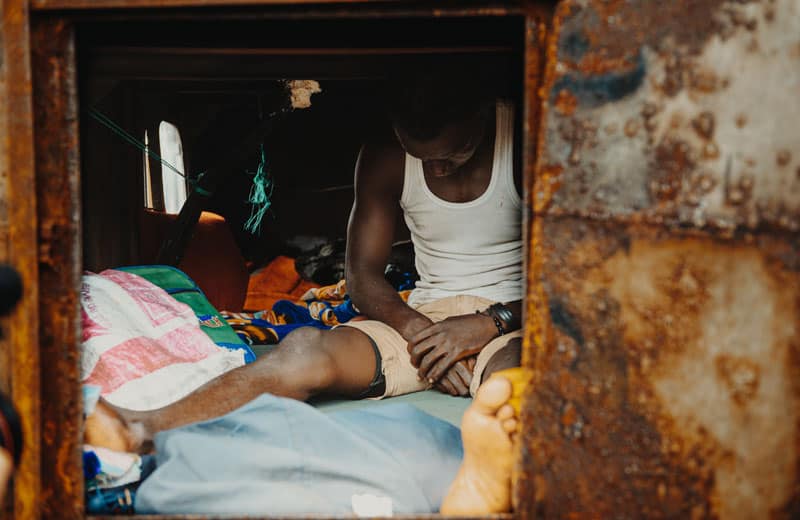 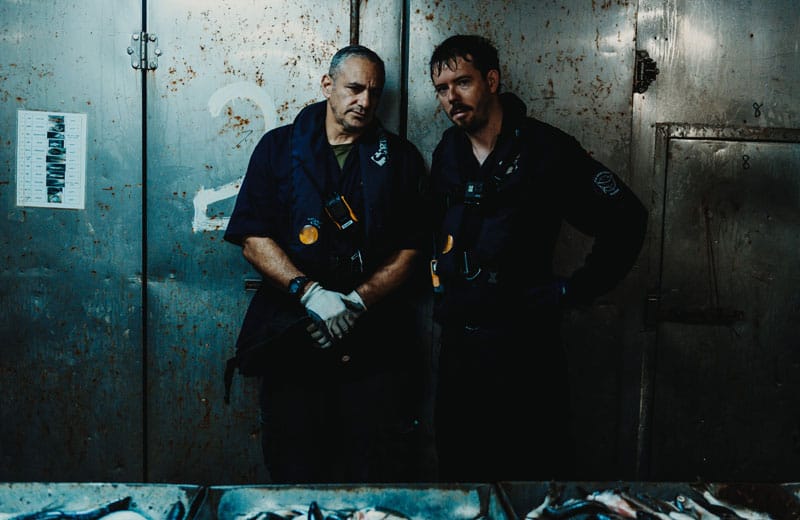 The United Nations Food and Agriculture Organization says almost half of the assessed fish populations in the Eastern Central Atlantic are overfished.

Sardinella and other small pelagic fish species are of critical importance to Gambians which is why the Ministry of Fisheries and Water Resources instituted a nine-nautical mile Special Management Area to conserve waters frequented by artisanal fishermen.

This rich biodiversity is the reason that industrial fishing vessels routinely trawl waters close to the shoreline. The Ministry of Fisheries and Water Resources receives daily complaints from local fishermen whose small nets are run over by the industrial trawlers. The incursions by the trawlers cause a rapid decline in the number of sardinella. 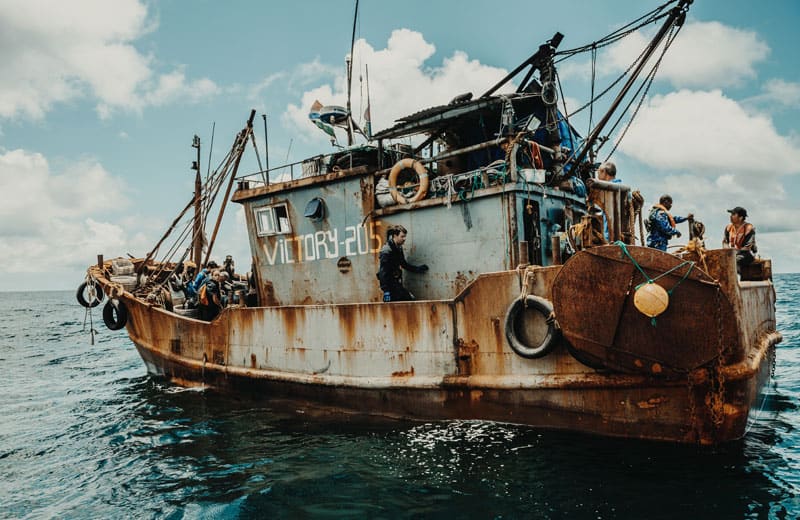 The Victory 205 and the Lu Lao Yuan Yu 010 were boarded by the enforcement agents and both vessels are now detained in the Gambian Port of Banjul.

Once on board the Victory 205, fisheries inspectors discovered that on two separate occasions in the past month, the trawler fished within the Special Management Area. They operated as close as 1.6 nautical miles from the coast on August 10th. 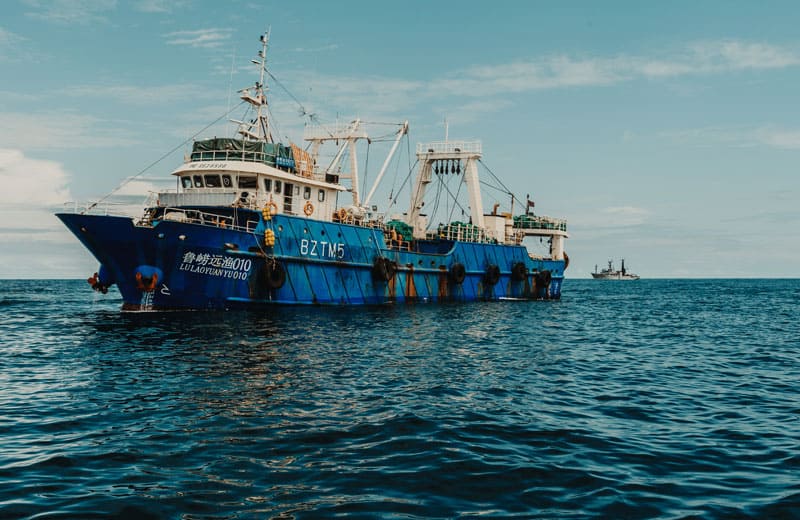 The Victory 205 crew consisted of six African crew from Sierra Leone and The Gambia. Their accommodation on board was a small crawl space between the engine room and wheelhouse. Their living conditions were abysmal, heated by the nearby engine room. Their accommodation was effectively an oven, with soiled mattresses and insufficient space to even sit up.

“Sea Shepherd recognizes the challenges of monitoring, control and surveillance in West African waters and therefore commends the government of The Gambia for taking the initiative to partner with Sea Shepherd to ensure protection of the Special Management Area and to combat illegal fishing. With two arrests already, the Honorable James Furmos Peter Gomez, Minister of Fisheries and Water Resources, is showing criminal operators that illegal fishing will not be tolerated in waters of The Gambia,” Peter Hammarstedt, captain of the Sam Simon said.

The Gambia is the seventh African coastal State to join the effort to stop illegal fishing around the continent through joint at-sea patrols. 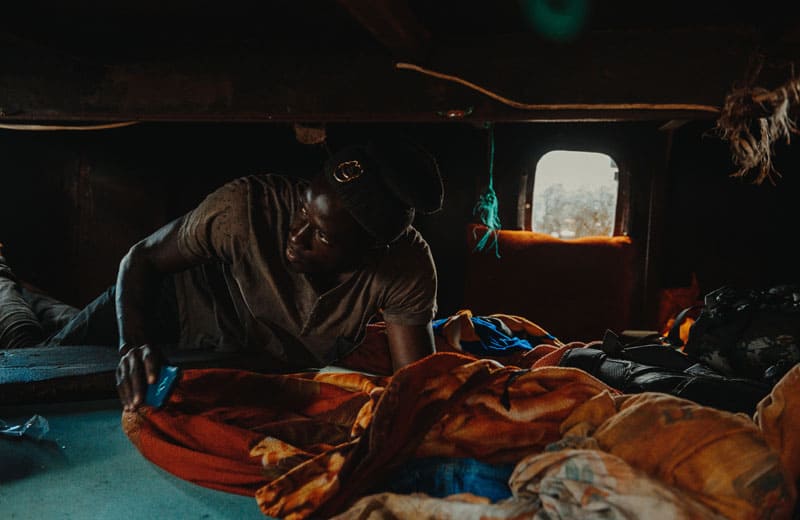 Operation Gambian Coastal Defense was supported by Kongsberg Satellite Services (KSAT), who provided analysis and imagery from high resolution synthetic aperture radar (SAR) and optical satellites. This included an unprecedented 20 images within the critical first 100 hours of the patrol, with intelligence made available on the Sam Simon bridge in as little as 45 minutes. Making use of 12 different satellites from seven different countries to provide blanket coverage of Gambian waters, they detected more than 750 vessels for evaluation during the first week of operations. Maxar Technologies also generously provided KSAT with high-resolution optical imagery to support the patrol.

Since 2016, Sea Shepherd reports the organization worked in partnership with the governments of Gabon, Liberia, São Tomé and Príncipe, Tanzania, Benin and Namibia to combat IUU fishing by providing the use of civilian offshore patrol vessels to African coastal states so that authorities can enforce fisheries regulations and conservation laws in their sovereign waters.

This unique partnership has so far resulted in the arrest of 34 vessels for illegal fishing and other fisheries crimes. 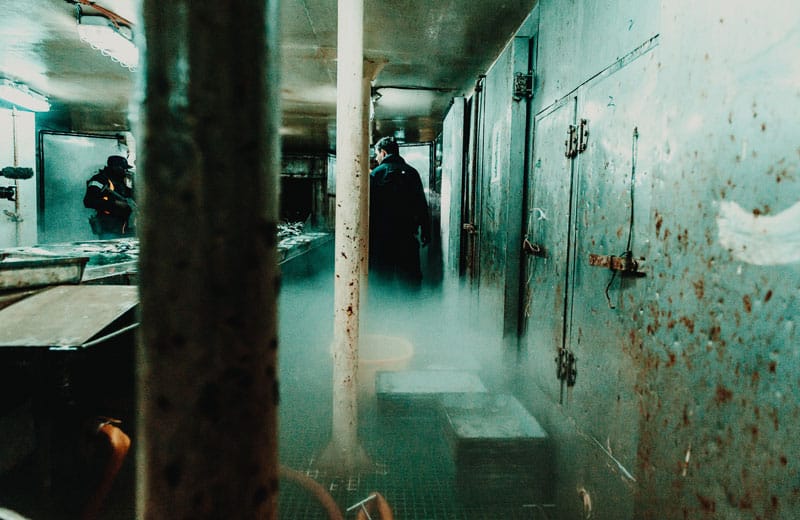 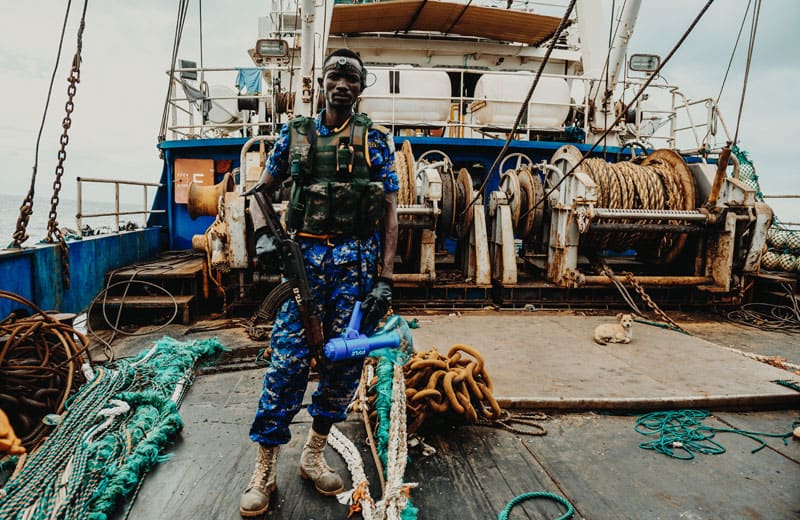 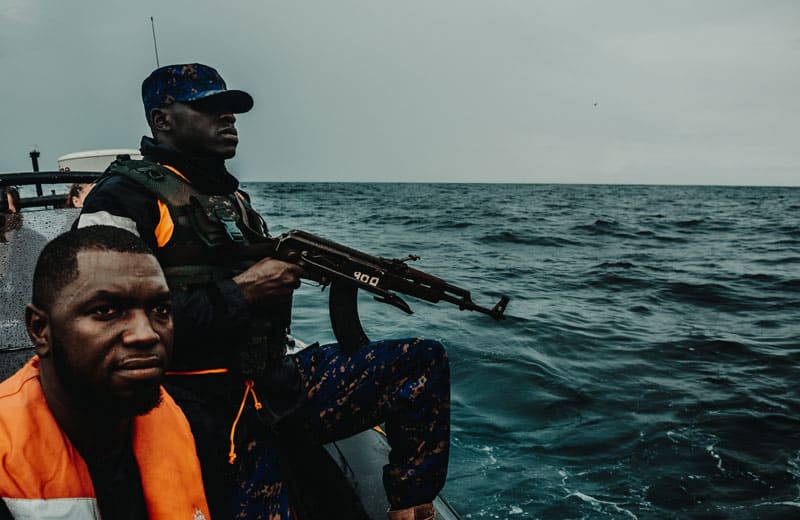