As the 18th Somali regional soccer tournament for peace and development ended successfully in the Puntland state on New Year’s Eve, the president of the semi-autonomous Somali State of Puntland Dr. Abdirahman Mohamed Faroole has offered to host the big event by the end of this year.

During an interview at the presidential palace in Garowe over the weekend, Mr. Faroole said that his semiautonomous state would like to host the Somali soccer regional tourney. It is to be held somewhere in Somalia in mid December this year if the Somali Football Federation accepts his offer.

“We hosted the tournament here in Garowe last year. It was a good beginning and we are ready to host the big football event. We are requesting Somali Football Federation to prefer Puntland once again,” the president said during the exclusive interview at his office in Garowe. 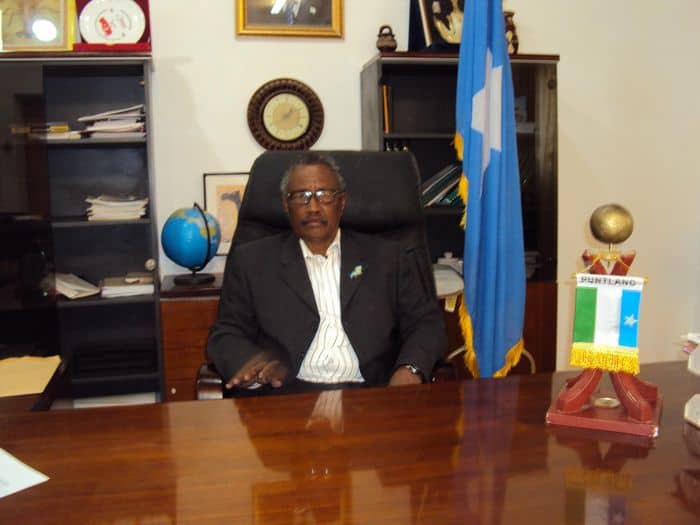 “The hosting of this tournament means a lot to us. We want to show the international community that there is another kind of recociliation which is much better than that the world has got tired of already. Football can bring people together and it is a positive sector for reconciliation and peace building in Somalia,” said the president of the Puntlnad state of Somalia.

He said that last year his region hosted three main important congregations. The events were: the elective congress of Somali women’s association, the assembly of Somali religious men and the country’s regional football tournament for peace and development. Those were the first of its kind to be held in Somalia for 22 years.

“We want to reconcile and to reunite the Somali people in a manner which is different from how the international community have faced Somalia’s reconciliation before,” president Faroole said adding that hosting a football tournament for the whole Somalia is important.

However other big cities including the south-western city of Baidoa and the former seat of transitional federal government (TFG) of Somalia are also candidates for hosting the regional soccer tournament. But according to analysts, the relatively calm Puntlnad is likely to win the contest.