Somalia’s national football squad ‘The Ocean Stars’ on Monday flew to the neighboring Djibouti for weeks of training before its 2014 FIFA world cup preliminary qualifier clash against Ethiopia on the 12th of November.

A very beautiful farewell ceremony was held for the team at the Somali Football Federation headquarters earlier in the day where SFF officials addressed the team members and urged them to exhibit a fair play during clashes against Ethiopia. 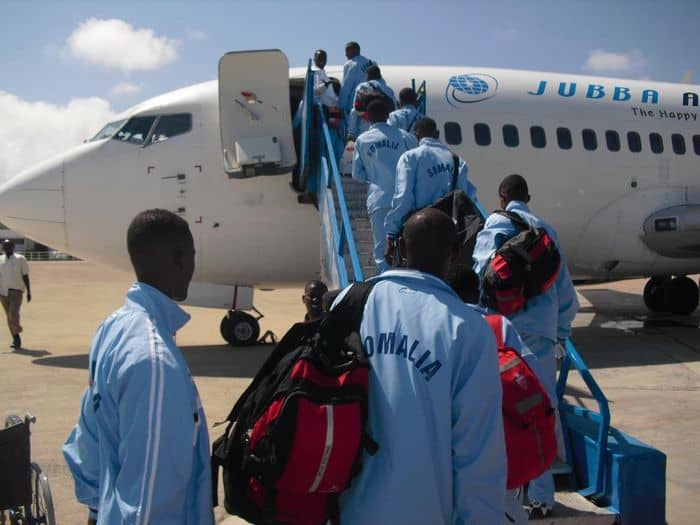 “We want each one of you to work as double, but be always friendly to your Ethiopian colleagues, what you are going to play is football and the football is peace and friendship among peoples in the world-no matter if you win or loose, but what we want is fair play” the Somali Football Federation deputy president for regional development Abdullahi Abow Hussein told the team members during the farewell ceremony.

For his part Senior Vice President Ali Said Guled told the team members that Somalis are waiting to hear good news after the end of Ethiopia clashes and that good news is that the team was victorious.

“You have to be best in discipline and keep the prayer times, because you are Muslims and you have to say your prayers on time” the senior vice president told the team urging them to be very sympathetic to their Ethiopian colleagues in football.

Nearly one million Somali fans are available in only Nairobi and Somalia wanted to use Kenya as a home country in its world cup qualifier clash first leg, but the match was later transferred to Djibouti after FIFA banned Kenya from hosting any world cup qualifier match.

Somali Football federation cannot host international matches at home because of the lawlessness in the country and for the past two decades the SFF has been using the neighboring Djibouti as its home country.

People in Somalia and Djibouti are descended from the same origin and share the same language, culture, religion and color.