“Sheik Aweys and his soldiers surrendered to the authorities at about 3:00 AM local time on Wednesday morning and they are in our hands now,” Himan and Heeb regional state spokesman, Mohamed Omar Hagafey said.

The whereabouts of the terrorist leader has been unknown since he escaped from the southern port town of Barawe last week as tension has been worsening amongst the leaders of the Al-Qaeda-proxy militants of Al-shabaab. 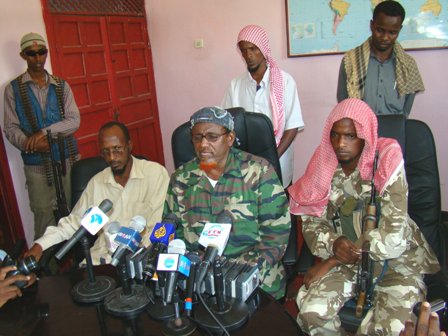 Reports indicate that before Sheik Aweys escaped from Barawe last week there was a fierce clash between his fighters and others loyal to the Al-shabab leader Mukhtar Abu Zubeyr whose real name is Ahmed Abdi Godane.

The group now seems to be dismantling after they were defeated in several battlegrounds in south-central Somalia, including the capital Mogadishu, from where they were ousted on the 6th of August 2001.

During the 2006 world cup, the hardliner was the man who issued the ban on sport and ordered his men to shoot football fans in the country where Somalis were reluctant to obey the orders and continued watching and playing football.

Sheik Aweys’ men attacked a building where hundreds were secretly watching the German-Italy Semi-final clash, killing two fans and wounding several others in the city of Dhusa Mareeb in central Somalia.

Sheik Aweys was the chairman of the consultative council of Islamic courts at that time, and was the most powerful man in the Islamic courts Union which ruled most of the country in the second half of 2006.

Early in the 1990s, Sheik Aweys founded the then Al Itihad Al-Islam group, the first terrorist movement in east Africa which carried out terror attacks in neighbouring Ethiopia in the 1990s.

It is yet unclear what Sheik Aweys plans to do after his surrendering, but so far there have been other former terrorist leaders who quit. Those include Sheik Ahmed Mohamed Islaan Madoobe who last month claimed to be the president of southern Jubba regions, a claim the Somali government denied to recognize.

Sheik Madoobe himself was responsible for the killing and arrest of football fans in southern lower Jubba region where he was the governor during Islamic courts Union rule in Somalia in 2006.