As the country’s 2012 division one soccer championship is interestingly underway in the capital Mogadishu, LLPP Jeenyo who are playing in the Somali League for the first time in more than 20 years held the defending champions Elman FC in a hotly-contested match on Monday.

In the early minutes of the match both teams started successive counter attacks on each other’s goal to try to score. There was no single empty seat in the stadium as an estimated ten thousand spectators were standing or watching over near by buildings. 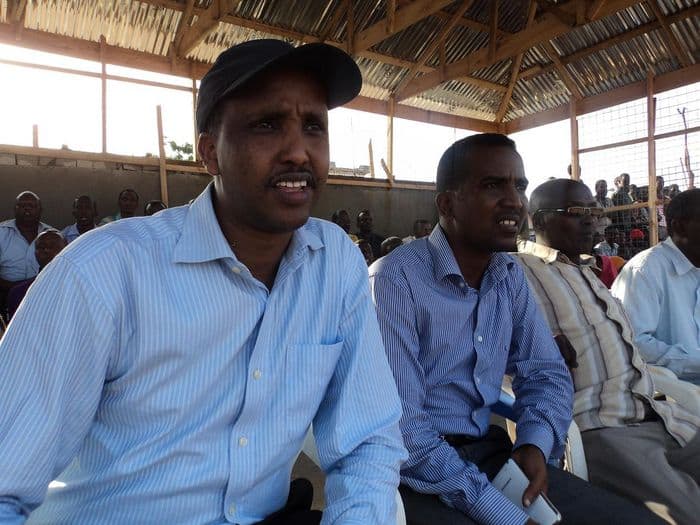 In the 37th minute of the first half Elman’s Abdulkader Ahmed Omar scored the lone goal for his team whose fans stood up with clubbing and chanting up with Elman for at least ten minutes when the goal scored.

However LLPP Jeenyo boys tried their best and launched more successive attacks on the opposite goal in a bid to compensate for the goal, while Elman were committed to scoring another goal in search of a 2-nill win according to its coach Abdi Farah Ali. But LLPP Jeenyo were committed to winning in the match.

In the 44th minute of the same half, Bashir Mohamed Aden scored with the first half of the match ending in 1-1.

In the second half both teams stepped up their efforts, but none of them succeeded in its ambition and the 90 minute period of the match ended in 1-1 with each team left with a single point.

Somali NOC President Duran Ahmed Farah who talked to the media at the Stadium praised the SFF authorities for the continuation of football activities and in particularly the holding of the country’s biggest event despite difficulties in the country.

“It really gives me a very great pleasure to come here and see the tens of thousands of people coming from long distances to watch this interesting match. One big thing is that I see LLPP Jeenyo playing in the Somali league after more than 20 years of absence,” the NOC president told the media.

He said LLPP Jeenyo was established in 1947 and was one of the founding clubs of Somali Football Federation.

He added its return is a very encouraging step. He hopes that other old clubs will retunr.

“The SFF is very praise worthy for helping the return of old clubs,” the Somali NOC president told the media during his press conference at the Somali University Stadium on Monday.