The Green Fields construction expert Lex Vander who spent six weeks in Mogadishu where he fixed the country’s old soccer facility ‘Stadium Banadir’ with an artificial football Turf has called the international football governing body FIFA to give much priority to Somalia which he said was fully committed to football more than any other country he visited before.

Mr. Lext Vander who returned to his country overnight on Friday after the successful completion of the first phase of the construction of Somalia’s old soccer facility told his farewell ceremony at the Lido Sea Food restaurant in the Lido beach resort of Mogadishu Friday that he had experienced very lovely days in Somalia where he said football authorities were very committed to the beautiful game. 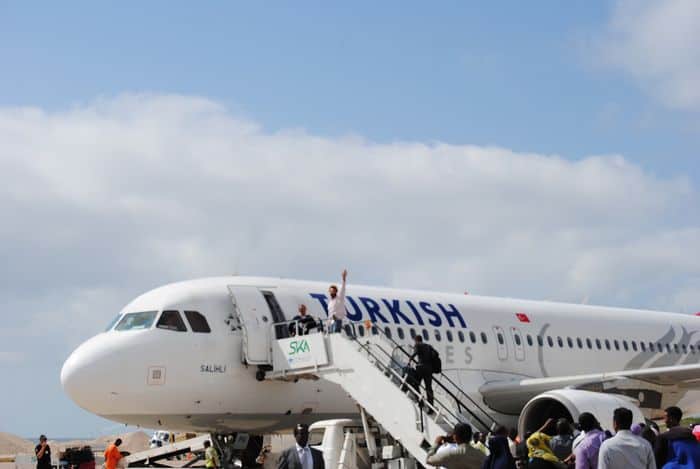 “I hereby want to thank FIFA for its forceful commitment to help the development of football in Somalia, secondly I praise the Somali Football Federation authorities particularly secretary General Abdi Qani Said Arab and executive committee member Ali Abdi Mohamed who stayed with me through all day since my arrival and worked with me as much as they could” Green Filed expert Lex Vander told the farewell ceremony Friday.

“I know that FIFA was always giving Somalia a special care, but I call on the global Football Association to give this growing football nation much priority than ever before, because I met here leaders who are very committed to football more than any other countries I had visited before”, the expert emphasized.

He noted that since he started the job in Somalia just six weeks ago, the secretary General Abdi Qani Said Arab and executive committee member Ali Abdi Mohamed (Shiine) didn’t leave him even for half an hour.

“I carried out such job in so many countries across the Africa continent and it will come to you as a surprise if I tell you that I didn’t see authorities who were with me at the stadium every hour, but you – Somalia really attracted me” the Dutch expert added during the farewell ceremony Friday.

He also urged the global construction company Green Fields to help Somalia as much as it can since he said Somalis are making a lot of efforts to recover from years of setbacks caused by the long-running civil wars and lawlessness in the country.

“What attracted me was that the secretary General who was accomplishing his daily job at the stadium where he established a mobile office, which means he had embraced a great responsibility to tighten my security and the smooth going of the job” Mr. Lex Vander told the farewell ceremony Friday before he and Somali Football Federation officials headed to Mogadishu airport where he flew by Turkish airlines.