Data or evidence supplied by researcher Ron Stewart may have archaeologists scrambling for a site at a cave near Qumran where The Dead Sea Scrolls were discovered. The announcement that The Ark of The Covenant is going to be unveiled to the world to see on June 26th, 2009 has numerous problems.

Bottom line being if the ark was truly in Ethiopia when Solomon’s supposed son named Menelik from Queen Basheba took it from Israel in about in 950-B.C. If the ark is in Ethiopia, than how is it possible God worked through the ark in Israel as scripture records at least on four more occasions, if it was in Ethiopia?

It is not consistent with scripture, does not make sense, is illogical, and does not reason out for itself. Plus, the Ethiopian ark also would have to look exactly what the ark was supposed to look like according to the scriptural description as outlined in Exodus the 25th chapter. There has also not been any announcement if archaeologists and scientists are going to be allowed to examine the Ethiopian ark to make sure of its authenticity.

(1) is the back of a large cavern behind this fake cave wall at the back of a cave In the red square is what might be-(2-3), here is this combinational image maybe The Ark of The Covenant. (4-5) may be the heads of the Cherubs on the lid. (6-7) may be the wings of the Cherubs on the lid. (8) Resembles the seven tiered Menorah part of the treasures with The Ark of The Covenant. 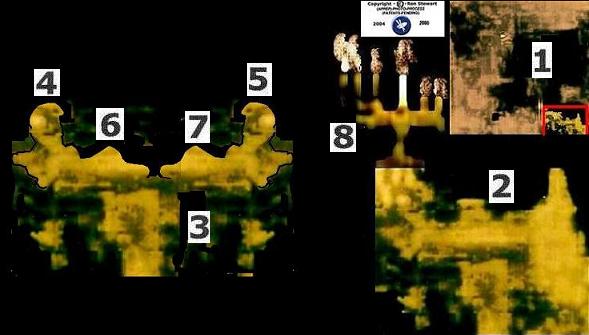 This mysterious snake like emitting golden and in the center bright white light started emitting from this when it may have came into contact with light. From the center between these possible Cherub wings. I do not feel and believe it is God’s power. But a powerful ancient reflection of gold at different angles like a diamond angled prisms. That when light hits it, is reflected.

An ingenious ancient psychological trick and lost artful technology to protect the possible ark and to keep away the superstitious. Or those allow fear to take place in their hearts and minds. For if this was God’s power according to scripture I’d be dead. And so would you and others. Because no one but the Israeli priest of old could look upon the ark and we’re looking upon an image of it in similar representation.