Carmelita Pittman, the founder of The Rose Breast Cancer Society, a 501.c3 non-profit organization in memory of her mother Juanita Zara Espinosa Uddin, was honored with the Golden Halo Humanitarian of the Year Award by the Southern California Motion Picture Council.

This prestigious award has been bestowed upon some of America’s most prominent citizens including Sybil Brand. The President of the Southern California Motion Picture Council, Randal Malone and the legendary movie star Margaret O’Brien presented Carmelita Pittman the honor in recognition for her outstanding contribution to humanity. Carmelita, a multi-dimensional artist was in good company with legendary film star Stella Stevens, who received The Golden Halo Lifetime Achievement Award. The Golden Halo Philanthropist Award was presented to Dr. Sheila Calhoun and the Golden Halo Entertainer of the Year Award went to K. B. Solomon, one of the more sought after opera singers in Los Angeles. Vladek Juszkiewicz received the Golden Halo Award for his contribution to the film industry. 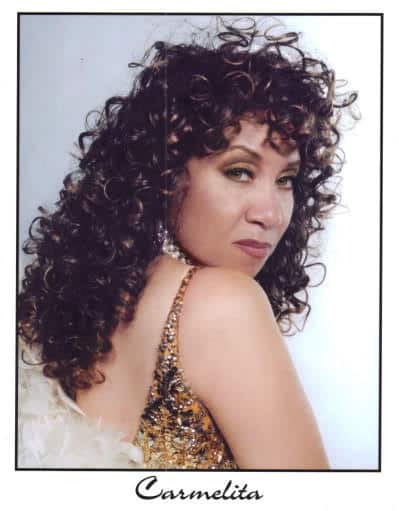 Also making presentations were Jarvee Hutcherson, President of Multi-cultural Motion Picture Association who gave Ms. Pittman a large bouquet of roses, and an impromptu speech by April Sutton and the Pink Lady a.k.a. Jackie Goldberg who was the Mother of the Year 2009 at the Annual Rose Variety Arts Show.

The Southern California Motion Picture Council was founded by Linda Burke May 1, 1936. During that time Ms Burke lobbied Congress to reduce the admission of movie tickets for children and got it passed, and it remains in effect today. SCMC has always stood for keeping classic Hollywood alive and has always presented awards with legendary stars. Margaret O’ Brien, an Oscar winner whose name has been honored four times on the Hollywood Walk of Fame and Donna Martel known for her western movies were responsible for presenting Stella Stevens with her Golden Halo Lifetime Achievement Award.

This philanthropic organization also has ventured into worthy causes. It also promotes high standards in films which seek family values and morality. Exemplary of these high standards was Kristian Kidd , twelve of age who co-hosted the event wearing a black suit and wide brim hat to match. A host of stars and luminaries were present at the event. Amongst those seen in the audience were Rosemarie, the original Lollipop Munchkins Jerry & Elizabeth Maren of the Wizard of Oz (Elizabeth even wore red shoes on her little feet),Allison Angren of “Little House on the Prairie,” Joe Cassini, and Gloria Pall. Southern California Motion Picture Council officers Randal Malone, Elizabeth Guardino, Isabel Paulson, Bee Beyer, Michael Schwibs, Virginia Freburg, and board members Esther Aboud, Dr. Sheila Calhoun, Carol Berry, Ron Barnes, were represented. Some of the board members of The Rose Breast Cancer Society in attendance included Gloria Berlin, author of “Michael Jackson, In Search of Neverland,” Traude Winik, Honorary members Senior Senator Bettio and Lady Java.

The event was held in Studio City at the newly remodeled Sportsman’s Lodge which is composed of a series of structures including ballrooms, meeting rooms, a restaurant amidst spacious landscaping composed of waterfalls, lakes, trees and flowers.