Although the official result of Caster Semenya’s gender tests are yet to be announced, it would seem that there may be some truth in the reports recently published in two Australian Newspapers, who claim that Semenya has no ovaries or uterus, but internal testes that produce large amounts of testosterone.

A term used to describe this condition is “hermaphrodite,” a person born with male and female reproductive organs.

Clearly, such a birth defect is not the fault of Semenya, who may not have been aware of the condition. However, one feels that the South African authorities probably suspected that there may have been a problem and were perhaps hoping that it would not be discovered?

According to some reports the IAAF suggested that Semenya be withdrawn from the 800 meter race (at the World Championship in Berlin), but the South African officials responded with a “Not over our dead bodies.” Unfortunately, they did not tell Semenya of their decision and Attlee Maponyane, vice president of Athletics South Africa, was quoted as saying “We felt that that was not necessary.” 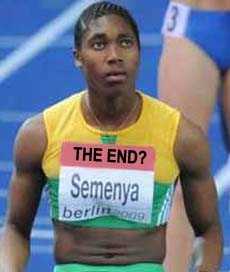 Perhaps if Semenya had been aware of this discussion, the athlete may have made the decision not to run, in order to avoid the publicity that followed the race. It appears that the authorities have put the glory of South Africa (winning a medal) above the feelings of the athlete.

Whilst some question whether Semenya’s condition provides an advantage over other female runners, it is probably fair to say that it does, which is why we have separate races for men and women.

Sadly, this leaves Semenya in a difficult situation, by probably not being eligible to race as a man or a woman. However, we also have to consider the other athletes who may be at a disadvantage because of this quite rare situation. In five Olympics, only 27 out of 11,373 women tested were found to have genetic gender issues.

Whatever the outcome of the tests and the decision of the IAAF, the Athletic authorities should make every attempt to avoid such a case going public again (before an investigation is completed).

The gender question was almost certainly the reason why Caster Semenya pulled out of a recent race, although the athlete’s coach said Semenya was not feeling well. It is very possible that Semenya’s race in Berlin may have been the last and may feel that the unwanted attention being received is not worth the trouble, regardless of the test outcome.