Momentum is building for adding a pitch clock to Major League Baseball games. In 1981, the average length of a game was two hours and thirty three minutes. The average game went up to three hours and two minutes during the 2014 season.

Pitch clocks will be tested out in the Double-A and Triple-A minor leagues this coming season. If it works as intended, it could bring down the length of games significantly. Baseball needs to modernize itself with a time clock, as well as adopt other innovations that could change the way many fans, especially younger ones, view the game.

Baseball is the only major North American sport without a clock. In today’s fast world, the game needs to find a steady pace that can keep it moving along. A pitch clock will stop unnecessary interruptions like the pitcher walking off the mound or a batter adjusting his gloves between pitches. A pitcher taking too long would result in a ball called against him, and a batter taking his time would be penalized with a strike.

A pitch clock will make the pace of play quicker and won’t change the nature or philosophy of the game. There are other strategies Major League Baseball can use to lower game times. There could be less time given between innings. This may be difficult for tv and radio to accept as it would mean less potential advertising dollars but it may retain more viewers and listeners. 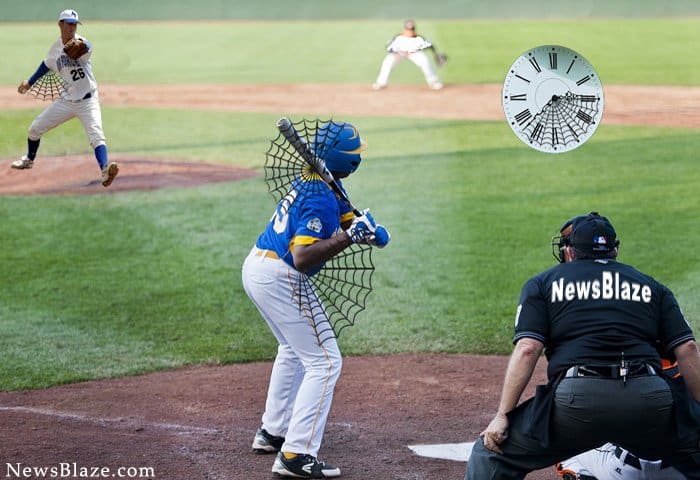 Since a relief pitcher should already be warmed up (unless the current pitcher goes out due to injury), there is no need for further warm up a pitcher when he gets to the mound. Instead, the batter and pitcher should be ready for action right away.

Visits to the mound by catchers, coaches, and managers for discussion can be limited or even eliminated. If a visit to the mound is considered necessary, the result should be that the pitcher has to be replaced. This will eliminate time wasting mound visits, which often result in the umpire walking to the mound as well to break up the conference.

Batters must no longer be allowed to call time or step out of the batter’s box. The only exception of course would be for injuries.

There needs to be a way to limit throws by the pitcher to first base to keep a runner from stealing. Perhaps one throw per at bat can be enforced to end this time killer.

Perhaps the best way to speed up game play is by enforcing a larger strike zone. The result would pressure batters to swing at more pitches instead of sitting on pitches and working the count.

By changing and tweaking various aspects of baseball, a nine inning game can be played closer to two hours than three. This would make a ball game similar in length to an NBA or NHL match. Faster games will mean keeping more casual fans, both at games and while watching on tv or online.

What do you think?