Does sailing a Cat give Oracle 9 lives? Apparently so, and to the joy of race fans around the world (minus New Zealand), the race series goes on.

Friday, once again the Kiwis were on the verge of ending the 2013 series with a single win while Oracle is still 6 wins and the resulting 6 points points from reaching 9.

The wind was light enough to start the race.

An exciting close call on the first run to Gate 2 resulted in a penalty which made no difference because Oracle pulled ahead anyway. 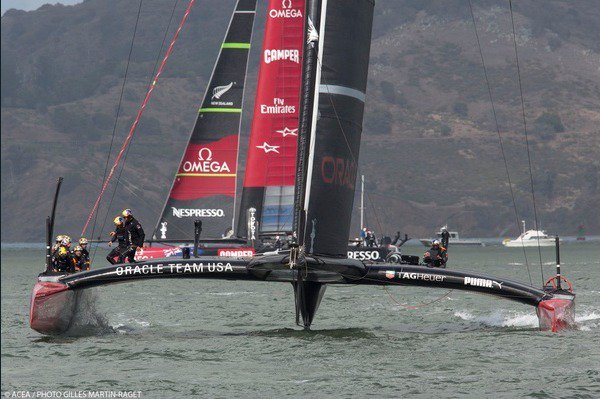 At one point New Zealand trailed by more than 300 meters on the upwind leg, running with the current.

Oracle extended their lead and the race seemed in the bag.

It was, and Oracle needs only 6 more wins in a row to retain the Cup, while the Kiwi’s once again go to bed knowing they only need one win to take the Cup down under.

Very disappointing for New Zealand fans and crew but nothing could be better for race fans who get to watch at least one more race.