WASHINGTON – (Newsblaze) The Obama administration, in what could be described as a fearful tone on Tuesday called leading front runner Republican Presidential candidate Donald J. Trump “disqualified” in response to his South Carolina speech stating that all Islamic immigration to the US should be halted. Monday marked a noticeable communications change from the White House in comments on Trump.

Obama Spokesman, Josh Earnest, speaking to reporters in the West Wing said, “But the fact is the first thing a president does when he or she takes the oath of office is to swear an oath to preserve, protect and defend the Constitution of the United States. And the fact is that what Donald Trump said yesterday disqualifies him from serving as president. And for Republican candidates for president to stand by their pledge to support Mr. Trump, that in and of itself is disqualifying.”

“Let me just step back and say that the Trump campaign for months now has had a dustbin-of-history-like quality to it, from the vacuous sloganeering to the outright lies to even the fake hair – the whole carnival barker routine that we’ve seen for some time now. The question now is about the rest of the Republican Party and whether or not they’re going to be dragged into the dustbin of history with him. And right now, the current trajectory is not very good.” stated White House Press Secretary Josh Earnest.

Earnest’s remarks on Monday caught the attention of reporters such as April Ryan of American Urban Radio networks who asked “What was really the final nail in the coffin for him to say he is disqualified as a presidential candidate? You’ve had ample time to do it before. Why now?”

The White House left Ryan’s question unanswered by only pointing to an “accumulation of offensive and incendiary comments from Mr. Trump.”

Many reporters wanted to know how the remarks were affecting to National Security such as Jim Avila of ABC News who quoted a statement by the Homeland Security Secretary Jeh Johnson who posited that sentiment.

“Absolutely” according to Earnest. He continued by saying “And the President described this at some length in his speech on Sunday night. The fact is, ISIL is trying to advance a narrative that suggests that they represent the religion of Islam in waging a war against the United States and the West. That narrative is false. It is a fantasy. The fact is that millions of Muslims are actually on the side of the United States and our international coalition in trying to degrade and ultimately destroy ISIL. There are Muslim Americans serving in our Armed Forces right now, putting their lives on the line for our national security. And to suggest otherwise only advances the narrative of ISIL.”

Earnest did contradict himself when asked if other world leaders were following the Republican front runner “Well, this may come as a source of some disappointment to Mr. Trump, but I’m not sure they’re paying that much attention to him.”

Other reporters such as Mara Liasson of National Public Radio were wondering why the White House was following Trump into the gutter “in your prepared remarks, you said something that struck me as very Trump-ian and not very Obama-like, when you talked about Trump’s fake hair. That’s a hallmark of Trump, to comment on somebody – your opponent’s appearance. It’s not something that I would ever expect to come from the Obama White House. I’m just curious – this was in your prepared remarks – what was the thinking behind it?” Liasson asked.

Earnest’s answer left reporters believing that he was calling Trump’s hair fake. Earnest downplayed it by saying “He was happy to be fact checked.”

Josh Earnest will address reporters on Tuesday in the West Wing. 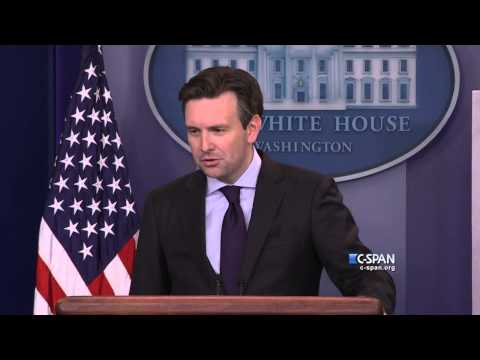