President Donald Trump stated the blatantly obvious on Saturday. He accused the Democrats of using DACA only “as a campaign issue.” Hopefully he didn’t need to spend more than five minutes figuring out the obvious.

Trump implored his Twitter followers to “vote Republican” in the coming midterms to fight back against hypocritical politicians more interested in votes than the nation’s security.

The expiration deadline is growing near for the DACA program that was instituted unconstitutionally by former President Barack Obama. The Democrats refuse to negotiate the issue with the president. It will affect up to 700,000 aliens brought to the U.S. as children.

While the Deferred Action for Childhood Arrivals program expires on March 5, the Democrats are playing a game of chicken with a skilled negotiator. It is their feeling that by not getting a deal, Trump and Republicans will come off as “insensitive” and not “inclusive.”

Whatever name-calling they wish to use, recent polls find the majority of Americans have tired of the illegal immigration issue. Decoding those polls, the Democrats have gone too far and now they are losing the patience of millions of citizens. 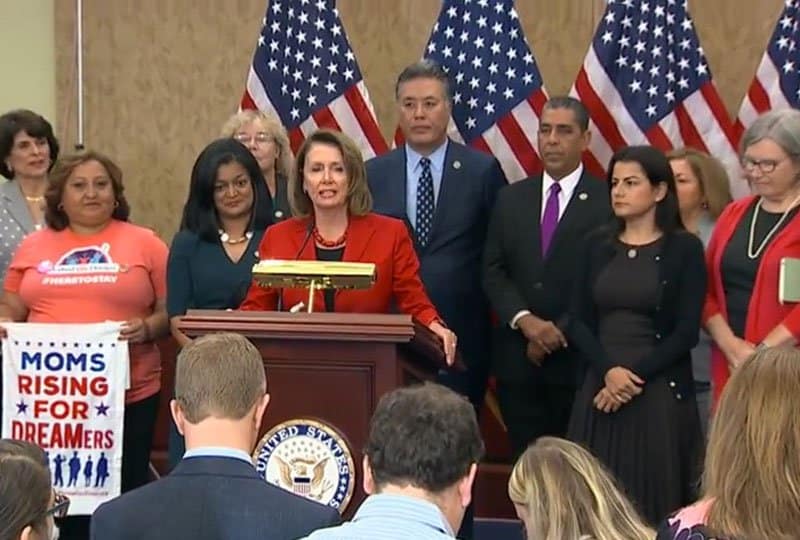 Democrats Voted For The Wall Twice

Trump himself, not an advocate of the DACA program to begin with, requested that any legislation for a permanent fix must include $25 billion for a wall on the southern border with Mexico to fight illegal immigration. Although the Democrats act surprised, they themselves have voted for it twice in the last two decades.

The president has been consistent in keeping his campaign pledges, including tax cuts, the defeat of ISIS, less federal regulations, etc. If the opposition hasn’t realized it by now, he pledged to build the wall to the voters and that is what he will do.

The two-year budget Congress passed Wednesday totals more than $400 billion. It does not include funding for the wall. But the crafty negotiator in the White House is well aware the Democrats have lost credibility with the recent bipartisan budget deal.

They now walk a fine line with the American people who more and more are rallying to Trump’s success with the booming economy and low unemployment. The Democrats’ leverage, if they ever had any, is waning fast and a tide of conservatism is sweeping the nation.