After 911, The (USA PATRIOT Act) was passed, an insidious Act passed by congress that lacked repercussive prudence, it was signed into law by former President George W. bush in 2001, and reenacted by current President Obama, the (PATRIOT Sunsets Extension Act of 2011) an extension of the USA PATRIOT Act.

(USA PATRIOT Act) is the acronym for, Uniting and Strengthening America by Providing Appropriate Tools Required to Intercept and Obstruct Terrorism Act of 2001.

This is quite a peculiar Act, because the acronym correlates with its definition, an unorthodox acronymic parallel that’s a peculiarity. I always ponder on the former and latter, which emanated first, does the aesthetic appeal of an acronym predicate the Act, or does the Act precipitate the potentiality of acronym or abbreviation, regardless of the undesirable dissonance. 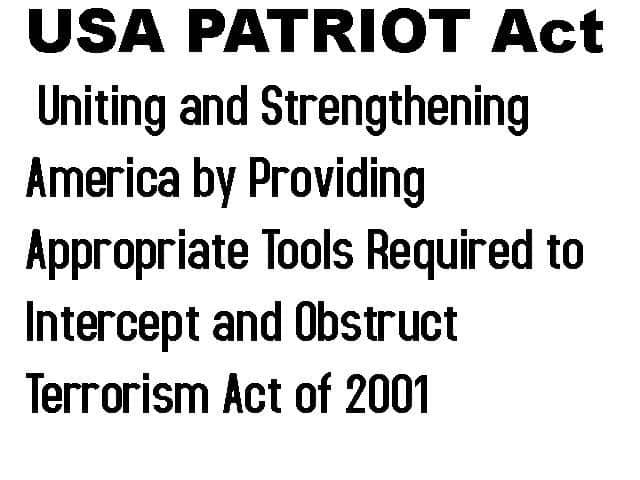 (PIPA) Protect IP Act, (SOPA) Stop Online Piracy Act, (CISPA) Cyber Intelligence Sharing and Protection Act; These were all proposed legislation to govern the internet, but they failed in congress, (With the exception of the return of CISPA). Does the acronym precede its definition or does the definition serve as a pretext to a bill’s acronym? The correlation seems inadvertent, because sometimes the connections can be arbitrary.

There’s a contrast between the USA PATRIOT Act, vs SOPA, PIPA and CISPA, The former correlates with its definition and the latter don’t, hence the reason I found the USA PATRIOT Act to be quite a peculiar acronym. It is self-descriptive, and quite a rarity, and although there’s a pervasive relationship between acronyms and their definitions, there’s also a ubiquitous non-correlation. Finding an offset in the myriad array is rather indistinguishable.

Whether there’s a connection or not is probably irrelevant; However, a correlation would serve as a great definition verbatim, an inextricable ingrained mnemonic. Congress should ensure the former or latter as a mandatory objective; after all, the US CODE was codified into 50 Titles, as a means of simplifying the cumbersomeness.