The American Heart Association (AHA) and the American College of Cardiology (ACC) recently released new cardiovascular disease prevention guidelines. They are an egregious example of much that is wrong with medicine today.

The guidelines propose a vast expansion of the use of statins in healthy people, recommending them for about 44 percent of men and 22 percent of healthy women between the ages of 40 and 75. According to calculations by John Abramson, lecturer at Harvard Medical School, 13,598,000 healthy people for whom statins were not recommended based on the 2001 guidelines now fall into the category of being advised to take moderate or high intensity statin therapy.

The American Heart Association (AHA) is a nonprofit organization with a mission to “build healthier lives free of cardiovascular disease and stroke.” Yet in its 2011-2012 financial statement, the AHA noted $521 million in donations from non-government and non-membership sources and many well-known large drug companies, including those who make and market statins, contribute amounts in the $1 million range. 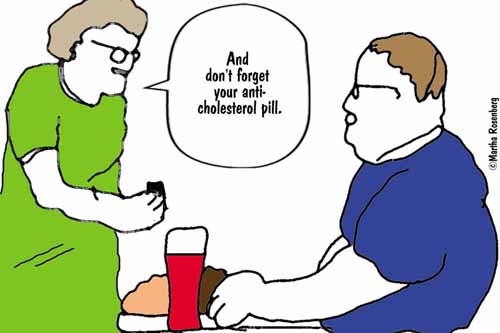 Even as many in the medical community suspected the guidelines were a ploy to help the AHA’s drug partners sell statins, it was revealed that the guideline’s online calculator to determine cardiac disease risk over predicts risk by an astonishing 75 to 150 percent. But the guideline writers are standing firmly behind their faulty calculator.

Seven of the 15 authors disclosed ties to industry. Originally, the panel chair, Neil J. Stone, MD of Northwestern University, declared that he has had no ties to industry since 2008. Jeanne Lenzer, writing in the British Medical Journal (BMJ) recently, interviewed Dr. Stone who said: “When I was asked by NHLBI [National Heart, Lung and Blood Institute] to chair the [cholesterol] panel, I immediately severed ties with all industry connections prior to assuming my role as chair.” However, prior to 2008, he accepted funding and consultancy fees from multiple pharmaceutical companies, including Abbott, AstraZeneca, Pfizer, Merck, and Schering-Plough among others. Dr. Stone also told the BMJ that he will “definitely” not take any industry funding for two years. Are we to believe that by severing his ties in 2008 his mind became an instant tabula rasa, completely devoid of any conscious or unconscious bias towards the drug companies which had been paying him? To do so strains the bonds of credulity past the breaking point.

The financial ties between large pharmaceutical companies and the AHA are numerous and very remunerative for the AHA, including huge donations from Abbott, Bayer, Boehringer Ingelheim, Bristol-Myers Squibb (BMS), Eli Lilly, Merck and Pfizer. BMS, along with Merck and Pfizer, are major funders of AHA’s Go Red For Women heart disease awareness campaign whose web site tells patients “If your doctor has placed you on statin therapy to reduce your cholesterol, you can rest easy-the benefits outweigh the risks” The site also proclaims that , “Zocor and Pravachol-have the fewest side effects,” and “statins may only slightly increase diabetes risks.”

The Women’s Health Initiative, a federal study of over 160,000 healthy women to investigate the most common causes of death, disability and poor quality of life in postmenopausal women, showed that a healthy woman’s risk of developing diabetes was increased 48 percent compared to women who were not on a statin. And contrary to what statin apologists say about statins only increasing diabetes risk in people who are at high risk of developing it anyway, for example the obese, women on statins in the Women’s Health Initiative who were of normal weight increased their risk of diabetes 89 percent compared to same weight women not taking a statin.

In 2010, AHA received $21,000 from statin maker AstraZeneca to run an AHA course about “emerging strategies with statins” at the Discovery Institute of Medical Education and almost $100,000 for learning projects including “debating controversial topics in cardiovascular disease.” The AHA defended the deceptively marketed and controversial cholesterol drug Vytorin. Did that have anything to do with the $2 million a year the AHA was taking from marketer Merck/Schering-Plough Pharmaceuticals?

The AHA also rakes in millions from food companies which are also million dollar donors and which pay from $5,490 to $7,500 per product to gain the “heart-check mark” imprimatur from the AHA, renewable, at a price, every year. The foods so anointed have to be low in fat, saturated fat, and cholesterol yet Boar’s Head All Natural Ham (340 milligrams of sodium in a 2-ounce serving) somehow made the cut as did Boar’s Head EverRoast Oven Roasted Chicken Breast (440 milligrams of sodium in a 2-ounce serving). Such processed, high-sodium meats raise blood pressure, the risk of cardiovascular disease and the risk of diabetes. A review of almost 1,600 studies involving one million people in ten countries on four continents showed that a 1.8-ounce daily serving of processed meat raised the risk of diabetes by 19 percent and of heart disease by 42 percent.

The new guidelines might make sense if statins were truly as effective as their proponents claim, and if they had no adverse effects. But they have an increasing list of side effects, which affect at least 18 percent of people who take them. These range from muscle pain, weakness and damage to cataracts, cognitive dysfunction, nerve damage, liver injury and kidney failure.

As Jerome Hoffman, MD, Emeritus Professor of Medicine at UCLA wrote recently with regard to these guidelines: “How did we arrive at a place where conflicted parties get to make distorted semi-official pronouncements that have so much impact on public policy?” How indeed?

Barbara Roberts, MD, FACC is an Associate Clinical Professor of Medicine at the Alpert Medical School of Brown University. She is the author of The Truth about Statins and How to Keep from Breaking Your Heart: What Every Woman Needs to Know about Cardiovascular Disease.