This morning as Republican Candidate Donald Trump appeared via phone on CNN for an extended interview with Chris Cuomo. He ducked every chance to give details on ANYTHING during the discussion.

Many people have called Mr. Trump a clown or worse, but today he showed exactly what he is, a shock jock.

Others have suggested that he is a stealth Democrat out to destroy the chances of a Republican candidate winning the next election.

But think about it a second. Shock Jocks state obvious problems over and over such as trade balance, trouble with Putin, decaying bridges, lazy politicians, big money in politics, dysfunctional Washington, but never give any solution.

Then when anyone gives a solution, the shock jock instantly shouts them down, calling them stupid or ignorant.

When challenged with the idea that he was a big whiner, Mr. Trump embraced the description saying he is a “fabulous whiner” who wins in negotiations by being the biggest whiner, going on and on until he wins.

There is some question about whether this tactic would work with a country which owns all our debt or has nuclear weapons.

Along with ducking every opening to give any details on HOW he would stop China devaluing its currency, he took the chance to tell everyone he was the top genius who attended the toughest school in the world.

When pressed by the CNN interviewer, Trump just said he had plans but wouldn’t disclose them until elected.

A really great mythical match up would be Donald Trump vs Morton Downey Jr. 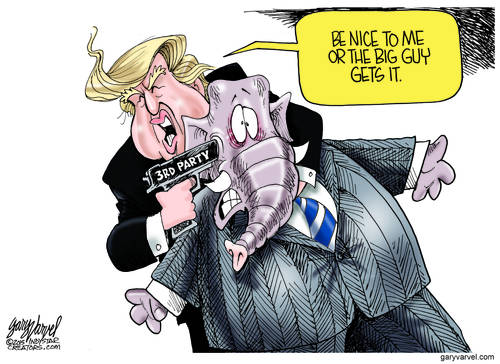