Former Labor Secretary Tom Perez defeated Rep. Keith Ellison (D-Minn.) to become the next chairman of the Democratic National Committee on Saturday. The contest came down to the establishment Hillary supporters versus the Bernie Sanders progressive wing of the party.

In a tight contest, Perez won with 235 votes on the second ballot, with 218 votes needed to reach a majority. He fell just shy in the first ballot, totaling 213.5 votes. The win came after Perez failed to clear the threshold required to win the first vote by only one ballot.

The contentious battle for the hearts and minds of the Democratic Party is sure to leave lasting political scars in a party already in political turmoil since the upset loss of Hillary Clinton last November. The party is ill-prepared to have an entire faction of its base feeling alienated by hard feelings that already exist from Sanders’ treatment by the Hillary campaign during the primaries last winter and spring.

Socialist Sanders and many of his allies backed Ellison, the first-ever Muslim elected to Congress and a star on the left. As predicted after the vote, several Ellison supporters expressed their doubts about backing Perez in the future.

It was just over a year ago the media was pronouncing the Republican Party the walking dead. Instead, a revitalized GOP is witnessing the stark divisions within the Democratic ranks that were supposed to unite them with the candidacy of then-GOP nominee Donald Trump.

The Democrats now face an uphill battle to bind the party that has been relegated to what amounts to a regional status. Aside from major strongholds of support in the Northeast and West Coast regions, the Democrats have lost the House, Senate and presidency within the last six-years. The Supreme Court will soon be decidedly more conservative for at least the next 25-years.

The vote Saturday mirrored the divisions among rank Democrats as did the controversial 2016 presidential primary between Sanders and Clinton. Nevertheless, the mainstream Democrats won out again. The question that Republicans faced a year ago now haunts the Democrats; will the party now split into two distinct ideologies?

As for the winner of the contest, Perez, the 55-year-old son of Dominican immigrants, becomes the party’s public face and chief spokesperson in charge of staking out Democratic opposition to President Trump. He brings virtually no electoral experience aside from a successful bid for Montgomery County Council and a failed run at Maryland attorney general.

Now Perez faces a monumental rebuilding after years of Democratic losses at every level of government. His side of the party must work to unify a fractured and angry group of socialists and party elitists. The Perez victory prevented the handing over of the party to the Bernie Sanders faction, but at what cost?

Disgraced former DNC Chair Debbie Wasserman Schultz, a surrogate for Hillary Clinton, is striking out at the Sanders people. It is comical that one of the primary operatives in the attempt to rig the primary against Sanders in favor of Clinton would even go public.

Wasserman Schultz resigned at the Democratic National Convention after hacked emails posted by WikiLeaks appeared to show DNC staffers working to undermine Sanders. The establishment Democrats would be smart to muzzle Wasserman Schultz for the time being.

Aside from the loss of both the legislative and executive branches of government, there are 33 GOP governors, compared to only 21 for Democrats. Since Obama was sworn into office in 2009, Republicans have gained more than 1,000 state legislative seats across the country.

The number one priority for Democrats is to turn things around quickly, particularly at the state level, where legislators will redraw district lines in 2020. It will require new faces to run the leadership of the party which are in short supply aside from ultra-liberals such as Sen. Elizabeth Warren and Sen. Corey Booker.

The electoral map for Democrats is dismal for the Midterm Elections in 2018. While the out-of-power party typically picks up House seats in an off-year election, Democrats are defending an incredible 25 seats in the Senate, including 10 in states that Trump won in 2016.

Can a deeply divided party rally to victory in elections just 21 months away? Much of that will depend on the success or failure of a Trump administration. Grassroots liberals across the country are eager for the new chairman to direct more resources and attention to those on the ground.

The larger question for the Democratic Party is whether they will participate as a group or splinter into several divisions of a party that once was. Whereas it appears the so-called Republicans are mending their differences with non-conservative Donald Trump, the DNC has yet to find a formula to heal the wounds of the 2016 presidential election and its aftermath. 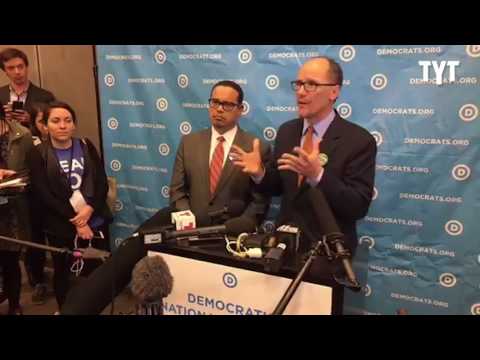