NewsBlaze News
Home USA Politics The Chickens Have Come Home to Roost and Hillary, Not Comey Is...

Hillary Clinton’s dramatic plunge in the latest polls is a derivative of the newly announced FBI investigation that, aside from liberal critics, never was closed last July 7th. The Clinton campaign is now in defense mode over this latest shadow that may very well cost her the presidency.

The interesting part of the liberal furor is the blame they now put on FBI Director James Comey for sending the now infamous letter to Congress outlining the latest update of the investigation and probable new evidence. Rep. Trey Gowdy (R-SC) said it best when asked about Comey’s decision. He wondered how so many Hillary-backers cannot realize that Comey didn’t establish a private email server for government business, destroy 30,000 emails after a congressional subpoena, didn’t lie to Congress, the FBI and the American people. Hillary Clinton has no one to blame but herself.

At this point, it is easy to assume that Huma Abedin probably lied under oath when she told the FBI she had turned over all emails and devices in her possession. The Wall Street Journal reported 650,000 new emails have been found on the computers seized at the Weiner-Abedin apartment.

Reflecting on the Watergate scandal, if Huma is vulnerable to a perjury or obstruction of justice charge, it could lead her to turn on her mentor. In any case, Hillary has to fire her. It brings to mind the infamous October massacre of loyal Nixon cabinet members, including his attorney general to steer blame from himself. That was done in vain, it turned out. Nixon resigned the following year.

If any of Hillary’s deleted emails contained classified or top secret material, she (Abedin) is in very, very deep trouble and would likely face criminal charges. And what happens if Hillary wins the presidency? The criminal investigation could lead to her being charged with felonies that would effectively take her off of any national security clearances a president has, which is all of them.

The constitutional crisis could paralyze the federal government for months, if not years. On top of this nightmare scenario, add to it that the FBI is also investigating the Clinton Foundation. They have been doing so since February. Obama appointee Attorney General Loretta Lynch has opposed the investigation and has tried to rein it in. The FBI, and local U.S. Attorneys in four cities, are determined to proceed.

Another burning question is, what did former President Bill Clinton and Attorney General Loretta Lynch discuss on her government plane in Phoenix on the tarmac just before Comey announced there would be no recommendation for Hillary’s criminal indictment? The “chance meeting” was just days before that announcement.

Meanwhile, the Clinton Foundation is so riddled with pay-for-play scandals that investigating it could be very dangerous for the Clintons. We may never know that happened in the meeting with Lynch on the tarmac. She says it was about Bill’s golf game and his grandchildren. Does anybody, even those in the tank for Hillary, believe that for a minute? Besides, Bill never did play golf in the 115 degree temperatures.

The fact of the investigations and the public announcement FBI Director James Comey has already made are likely to sink Hillary’s candidacy. It puts her email and Foundation scandals squarely on top of the public agenda in the critical final days before the election, not to mention the crumbling law known as the Affordable Care Act aka Obamacare.

GOP nominee Donald Trump had been gaining every day the week before Comey spoke. Obamacare premium increases, the onset of Trump’s effective negative advertising, and the ongoing (and still coming) WikiLeaks revelations have all played a part. Now with Comey’s shocking move, you won’t hear it from Hillary, but barring something dramatic with a week to go, she is doomed.

Want more bad news for floundering Hillary? How about the memo from Bill Clinton’s chief aide Doug Band? Confronted with charges from, of all people, Chelsea Clinton, that he was “ripping off” her father, an angry Band fired off a 13-page list of all the income he had channeled to the former president.

Here’s the shot that killed her father; it came to over $60 million and provides a playbook and scorecard for the pay-for-play scandals at the foundation. Oh yes, the advantage has shifted decisively back to Trump. 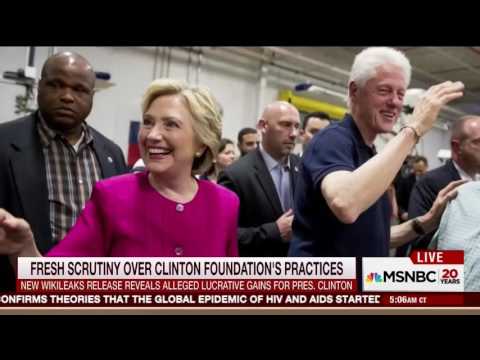