Republicans should be dancing in the streets as the Democratic Party continues to self-destruct. During Hillary’s ill-fated run for the presidency in 2016, Sen. Bernie Sanders was considered the number one enemy of “establishment Democrats.” His radical, socialist ideas were the “tempest in a tea pot” to destroy Hillary’s chances.

Now the 75-year-old socialist senator from Vermont is being welcomed with open arms. The rogue independent has become a powerful and welcome voice for a party struggling to find its identity after a devastating defeat last year. But is he the wolf in sheep’s clothing for a decimated party desperate for a new message?

Bernie Sanders is not technically a Democrat at all. A clear warning label should be placed on his rise to the top of the party’s elite. Falling into the trap Sanders may be setting include Hillary Clinton’s own Democratic strategist Jim Manley. He admits, “It continues to drive me a bit nuts that he (Sanders) continues to register as an Independent, but the bottom line is that he is a good Democrat.”

But the underlying question is whether that is fact or fiction? Is Sanders preparing to start a third party on the backs of weary Democrats looking for a leader to bring them out of the arms of defeat? As far back as January, 2015, many “establishment Democrats” worried that Sanders, a self-described democratic socialist, was pushing the party too far to the left.

Sanders brought his radical ideas to the forefront including “free tuition” for every American. He angered many Clinton-backers who felt he stayed in the race too long and cut into her message and campaign coffers. They felt he deserved a large part of the blame for Clinton’s loss to Donald Trump in the general election. 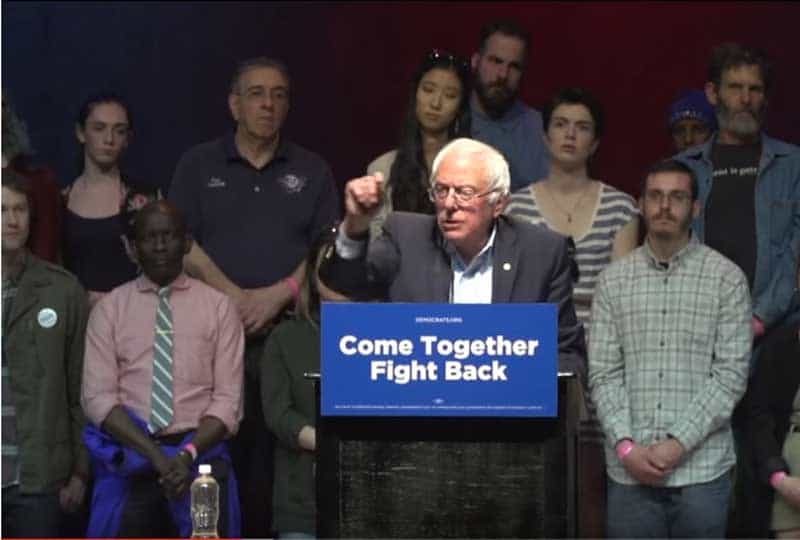 But Sanders surprised many of his own supporters by publicly endorsing Hillary; even after it was proven she and her DNC machine did everything they could to undermine his candidacy in the primaries. Even former President Bill Clinton told new Democratic National Committee Chairman Tom Perez that he didn’t want the Democratic Party “to be simply the party of Bernie.”

Bill Clinton is a very polished and informed politician and strategist. His very words could come back to haunt the traditionalists of his party. Is Sanders the key to rebuilding the party, or is he the new Gene McCarthy who famously challenged incumbent Lyndon Johnson for the presidency in 1968? History shows that McCarthy was the key to bringing down Johnson and the politics of the moderate Democrats of the time. They went on to lose to Richard Nixon that year.

Is a declared independent the right choice to be the voice of the Democrats? Is it only because the Democrats’ bench is so thin that desperation has set in? The DNC is trying to harness energy from Sanders and unite the party after last year’s divisions. But is that what Sanders plan is? He is 75, one of 100 senators and has the ambition to reach out to millions of disappointed young Democrats and far left ideologues.

Has Sanders really recovered from the ill feelings from leaked emails that revealed DNC staffers had sought to tilt the scales during the primary against Sanders and in Clinton’s favor? It is obvious that angered Sanders supporters have never forgotten their candidate’s treatment. They continue to press for changes at the DNC. On top of that, Sanders backed Rep. Keith Ellison (D-Minn.) in this year’s DNC chairmanship contest, only to be rebuked with the victory of Tom Perez.

Whistling in the dark may be the way to describe wary Democratic traditionalists. Even after the presidential race Sanders decided to remain an independent. Bill Press, a columnist for The Hill was an early supporter of Sanders. He said, “I do think it’s strange. I was rather surprised that he went back to being an Independent but I don’t think it matters. People like his ideas. Bernie is Bernie. Whether he has an I or a D after his name, nobody cares.”

Whether that is a naïve statement remains to be seen, but it should deeply trouble the party itself. Sanders is in the seat of power over a decimated and disorganized party and message. His radical ideas are not a majority of the Democratic Party and a distinct minority of the American electorate. If he becomes the face of their message, the next election could shape up as Nixon v McGovern in 1972.

The very liberal McGovern lost in a landslide to Nixon that year.

There is no question that Sanders will use his newfound celebrity to push causes vital to Democratic unity. What about the rest of the country that is not exactly infatuated with Sanders’ ideas about higher taxes and bigger government?

The last election proved Sanders’ ideas are not the norm for the country’s base of voters. Will he really be a force in helping to elect Democrats in Congress as well as in gubernatorial and state legislature elections?

That may be the case in the Northeast liberal corridor or on the radical West Coast, but what about the rest of the country? Outside of liberal havens such as New York City and Berkeley, there is not exactly a large amount of protesters gathering to stop Donald Trump’s agenda.

The thinking Democrats of the middle ground feel Sanders will be helpful in rebuilding the party, they just can’t just rely on him going forward. That is the key to the entire Sanders revolution. As his stature grows stronger, will being a party spokesman as an independent be enough for this man?

The old guard of Hillary supporters from her failed campaign is wary at best. They find Sanders’ role offensive. They are deeply concerned, and rightly so, that making Bernie one of the main figures of the Democratic Party isn’t going to do a damn bit of good.

The bottom line for thinking Democrats should be this: Should Bernie Sanders become disenchanted with his treatment within the party and form his own, the scenario will be in place.

The Democratic Party lost the House in 2010, the Senate in 2014 and the presidency in 2016. The Supreme Court is turning to the right; the Republicans own 31 state governorships, most state legislatures and all federal court appointments until at least 2021. Is Bernie Sanders, the avowed socialist, the man to turn that around?

Should the man from Vermont unleash a third party, those figures listed above will be nothing compared to what such a move could bring. That is the total dissolution of the Democratic Party as we know it today, period.