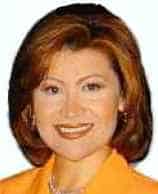 Washington, DC – October 30, 2007. Jackeline Cacho, award-winning former journalist and national anchor in the Spanish-speaking media and current owner and vice president of Finding Productions and Sunlight Art Design, joined The Peace Alliance Campaign for a US Department of Peace as a national spokesperson.

Her duties include television, radio and guest appearances at national and local events on behalf of the Campaign. Her role is expected to help the Campaign increase awareness in Spanish-speaking communities regarding HR 808, proposed legislation to create a US Department of Peace and Nonviolence.

“It’s criminal that our communities suffer day in and day out when the talent and experience needed to heal them is within our reach,” Cacho said. “If we support this legislation, we can see a difference right in our own homes, schools and neighborhoods.”

“We are elated that Jackeline has agreed to be one of our national spokespeople for the Campaign,” said Peace Alliance Executive Director Dorothy “Dot” Maver. “Her passion for peace and this legislation will help us garner the support needed to get Congress to act.”

Nicknamed “the Latino Katie Couric,” Cacho has long championed causes for the underprivileged, using her journalistic talents to expose injustices. During her more than 15 years in journalism, Cacho served as national anchor at TV Azteca America Network and a reporter for Univision. During her time with Univision, she was a key contributor to “Las Mananitas Para La Virgen de Guadalupe,” the network’s highest-rated show four years running. Her new production company concentrates on creating positive national Spanish-language programming and campaigns for the Latino community. Cacho also served as a national spokesperson for Los Angeles’ City of Hope Hospital’s “Drop of Life” campaign, and was most recently named Advocate of The Year 2007 by the Latino Business Association of Los Angeles.

Cacho’s dedication to peace activism stems from personally witnessing brutal conflicts between guerrillas and government forces as a child in Peru. “You have no idea what violence does to a child,” Cacho said. “We can either continue reacting to violence after it occurs, or we can get serious about preventing violence in the first place.

“As Latinos, we all pursue the same dream and common prayer, for peace to come to our countries, our communities, our homes and our lives,” Cacho continued. She firmly believes that HR 808 is the best path to achieving that. “A cabinet-level US Department of Peace and Nonviolence will make the quest for peace a national priority in our country, and will give us a real chance at achieving our dream of a less violent world,” she said.

In her new role, Cacho joins numerous other prominent US Department of Peace Campaign spokespeople and advocates, led by NY Times Best-selling author and speaker Marianne Williamson, who is also Peace Alliance co-founder and president of the Board of Directors; and including legendary journalist and former CBS Evening News Anchor Walter Cronkite; motivational speaker Mike Robbins, author of “Focus on the Good Stuff: The Power of Appreciation;” and actors Frances Fisher, Joaquin Phoenix and Amy Smart.

“Real security only comes through genuine peace,” Cacho said. “And to create genuine peace, we must first create the necessary foundations and infrastructure for peace. We must create a US Department of Peace.”