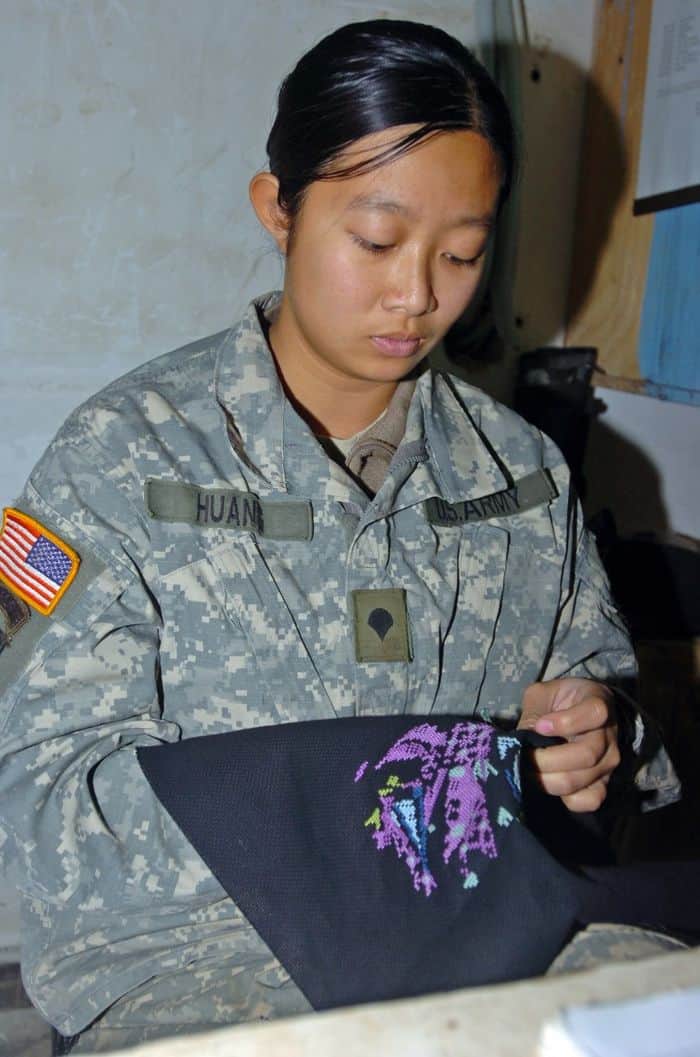 Spc. Michelle Huang, Company C, 426th Brigade Support Battalion, 1st Brigade Combat Team, 101st Airborne Division, is attached to the 1-32 Cavalry at Forward Operating Base Normandy. The daughter of first generation Chinese immigrants, she grew up around sewing but never picked it up until she came in the Army three years ago.

“I was bored and a friend was doing (cross-stitch patterns) too,” Huang said. “It’s a good way to kill time.”

Huang, 23, grew up in New York City’s Chinatown area. Her father and mother, Jiam Wen and Yu Ping, came to the U.S. just prior to their marriage. Her mother’s career revolves around pattern sewing, but Huang said she never picked it up as a child.

“I was never really interested in sewing like all the other girls,” Huang said. “I was a tomboy. I always wanted to go outside and play.”

After attending college for two years, Huang decided to take a year off from her studies. She then took a class on emergency medical technician procedures which rekindled an interest in military service.

“I had always been interested in the military, but I never went through with it,” Huang said. “It was something different to do, and it was more responsibility.”

Huang served at Fort Campbell for two years and came to Iraq late last year. She was first stationed at Forward Operating Base Caldwell before coming here when the aide station was set up.

Her supervisors said Huang does her job quite well. Originally trained as an evacuation specialist, she has added patient administration and lab-working skills to her professional repertoire.

This day finds Huang working on a pattern called “Oriental Lady Beauty.” She is sewing the colorful pattern onto a black cloth.

“You’ve got be really careful,” Huang said. “You have to count the stitches.

Because of her limited time, Huang said it sometimes takes months to finish a single pattern. She said the end product is well worth the effort.

“It’s a pretty simple hobby,” Huang said. “It’s nice to see a design come out of it.”

Huang sees cross-stitching as helping her fingers remain nimble for applying sutures to her patients. Many of the actions are similar, she said.

Besides the practice, Huang enjoys cross-stitching as a creative outlet. She enjoys making the designs take shape and seemingly come to life.

“A lot of it really depends on your imagination,” she said. “You can do whatever you want.”

For her next challenge, Huang is considering applying to the Army’s physician assistant program or training to become a flight medic.