NewsBlaze News
Home USA Health Is the GM Salmon Approved by the FDA This Week Safe to...

The AquAdvantage salmon, a salmon genetically modified to grow twice as fast as wild Atlantic salmon, was approved by the FDA this week. Created by Boston-based AquaBounty Technologies, the GM salmon was created by inserting the coding sequence from a chinook salmon growth hormone gene and a “terminator” gene from the ocean pout into wild Atlantic salmon. Instead of reaching its full size in three years, the GM fish is ready for dinner plates in 18 months, representing significant profits to its developer.

Environmentalists and food activists express many doubts about the GM salmon beginning with the Jurassic Park like scenario in which they escape and breed with wild fish. Most AquAdvantage salmon are sterile says AquaBounty but one to 5 percent aren’t sterile which would be 750,000 fertile fish from the 15 million planned eggs. According to the studies presented at FDA hearings, AquAdvantage salmon eat five times as much food as wild salmon and have less fear of predators – furthering Jurassic Park fears. 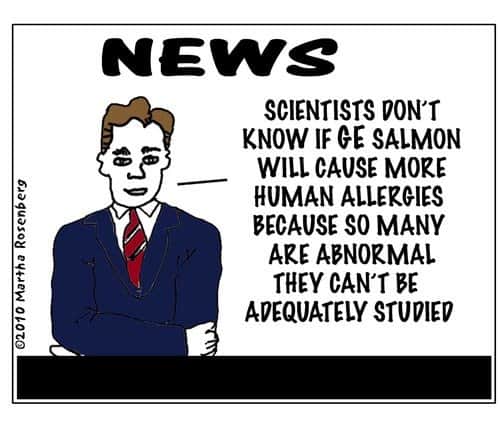 At the 2010 hearings, AquaBounty presented the GM fish as a welcome alternative to aquaculture which has become a lamentable stew of effluvium, toxic drugs, algae blooms, sea lice, disease and depletion of wild fish used to feed farmed fish. The beauty of AquAdvantage salmon production, said Yonathan Zohar, PhD from the Center of Marine Biotechnology at the University of Maryland, is it’s a land-based system. Not only is it away from coastal waters to discourage escapes, its carbon footprint is reduced by greater densities of fish than traditional aquaculture – up to “80 to 100 per cubic meter” said Zohar. The GM salmon will feed the world, help the US trade deficit and boost US food industries said promoters.

But the advisory panel that heard the science behind the fish was less impressed. When FDA food scientists Kathleen Jones and Kevin Greenlees presented allergy studies, they were asked how “safety” could be established for the fish when there was no absolute numbers that was considered “unsafe.”

They were also asked why an entire category of salmon was dropped for no apparent reason in one table. “I am not a statistician and she is not here today,” said Kathleen Jones. “You’ve reached the limit of my statistical knowledge” said Larisa Rudenko, another FDA staffer.

A quick peek into the government and AquaBounty’s briefing materials did not restore faith. Could the GM salmon cause more allergies than normal fish? The FDA report says it is not possible to tell because of excessive culling of “abnormal” salmon. In fact, only 16 percent of AquAdvantage salmon produced in 2005 were normal – 71 percent had moderate irregularities and 15 percent had severe irregularities.

They want us to eat what?

For being a high tech product, the GM salmon’s production plans are low tech. Eggs will be shipped from Canada, where they hatch, to Panama where they are grown in “hard plaster coolers,” and there were no stated contingencies for human error, employee theft and natural disasters presented at the hearings.

Then there are “durability” questions – a euphemism for “genetic drift” and “mutation.” An unexpected and unwanted “rearrangement” in which inserted genetic material has moved from “the far upstream promoter regions” to a “downstream location relative to the growth hormone coding region,” is cited in the FDA briefing packet. What the heck does that mean? The loss of part of a “35 base repeat region” and possible duplication of another effect were also reported.