NewsBlaze News
Home USA Health Illuminati ‘Vampires’, But Who are The Real Suckers?

This article will be considered by most as a “conspiracy theory” and receive the usual response by the mainstream media (instant denial and a “witty” comment), which will be supported by most of the public (as usual) because they still have some notion that their “leaders” have morals, and are doing what is best for them.

Unfortunately, this is not the case and the evidence is there for us all to see, if only we made the effort to look.

Firstly, you have to ask yourself who provides the information that says everything is alright? Are the people who question the authorities really as crazy as you are led to believe, or is there some truth to what they are saying?

Let’s take a look at the current Swine Flu “pandemic.” Did this suddenly occur naturally, or was it created for a purpose. Your first reaction is likely to be “Of course it happened naturally, why would anyone want to introduce a virus like this?” 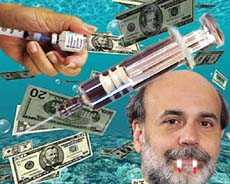 Why indeed, they would have to be crazy to do something like that, wouldn’t they?

You’re right of course, how silly of me to think such a thing. Even as I write this, the drug companies are working flat out to produce a sufficient vaccine supply to protect us. How lucky we are that they managed to make this so quickly (a bit like the anti-virus companies who find cures for computer infections within 24 hours!)

But wait a minute! According to one report, Baxter International (a drug company) filed a patent for the H1N1 (swine flu) vaccine in August 2008, which was published in March 2009 (one month before the virus appeared in Mexico!) Read more on this in the following article “FLU IS NOT THE BIGGEST DANGER …”

We are frequently warned that the current flu virus could (or will) “mutate” If this is true, what is the purpose of the vaccine? Is this simply some money making scam to produce huge profits for the drug companies (check out this article “Glaxo profits up 11 percent on emerging markets”), or is there some other reason why they want to inject us with their latest potion?

It’s not just the drug companies that are “cashing-in” at the moment, you may have read about Wells Fargo posting a record second quarter profit recently ($2.58 billion). Just one of the banks to receive government help (taxpayer’s money) and a bank that has foreclosed on thousands of people (making them homeless).

Thanks to an artificially created financial crisis and a generous donation from the government (your money), some banks have done very nicely. Those banks that didn’t make it (receive any handout) were taken over by the remainder, leaving less competition (and more profit) for the future.

And what are the banks doing with the cash? At the moment, very little, it is certainly not filtering through to the people who need it the most and difficult to find out exactly what is happening to it.

The Federal Reserve has reportedly given out trillions of dollars but seem uncertain where this has gone. But seeing as they make interest on giving out paper money (which they print whenever they need more), what do they care? They have also refused to undergo an audit in respect of these mysterious transactions (I wonder why?)

As if taking our money and health is not enough, some want our bodies as well (New Jersey mayors and rabbis arrested in corruption investigation). According to the article, Two New Jersey mayors and dozens of political and religious figures have been arrested and charged in a massive bribery and money laundering scheme that included traffic in human body parts!

One northern New Jersey man, Levy Izhak Rosenbaum, was charged with conspiring to traffic human organs. Officials said he promised to sell a kidney for $160,000 that he had acquired for $10,000.

But don’t worry guys, I’m sure there is a perfectly good explanation why the government, politicians, drug companies, banks, rich and powerful business people are treating you the way they are…..because you let them!