Medical history was made by two Birmingham hospitals when carrying out the UK’s first successful domino transplant (where organs are transferred between donors).

Eight-month-old Lubaya Turpin was the youngest of the five patients and was born with a rare liver condition. Her father, Dwayne Turpin, commented “I’ll definitely be putting my name on the donor list knowing first hand what a change it makes to someone’s life”

The doctors have said that more transplants could be carried out, but there is a lack of organs being donated. One patient said that transplant donations should be made compulsory, but that is a view that few will share. 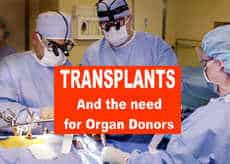 Clearly there is a need for more organs, but despite the efforts of many to encourage people to add their names to the donor list, the numbers are still very small.

One can understand the concern of relatives faced with the possibility of organs being removed from their loved ones, especially as the pain of their loss is so fresh in their minds.

Some potential donors no doubt worry about the urgency of surgeons receiving their organs, and may wonder if their own condition will be less important in view of this. Doctors will obviously say that this is nonsense and hopefully this is the case, but patients need to be certain that their own lives will be given priority to the very end.

Perhaps an option that could be considered is a payment for the organs that are used, with the payment going to the deceased’s spouse, children or next of kin? Money will never replace a person’s loss, but it could help the financial difficulties that often follow a death (funeral expenses for example), especially if the person has no life assurance or other assets.

Organs are already being brought and sold, so this is nothing new, but sadly some people are making huge profits from this. If more donors could be encouraged to donate their organs (when they die) in exchange for some financial benefit, this would reduce the current demand and eliminate those who profit from the misfortune of others.

Those waiting for transplants usually suffer for many years (if they are lucky enough to survive that long) and quite often require the care and attention of doctors, and frequent visits to a hospital. Providing this care takes up a lot of time and money, and it would probably be cheaper to offer to buy the organs, as getting the patient back to health would save a huge amount on medical expenses (and benefit the patient as well).

Donors of course still need to be convinced that donating organs is the right thing to do, but maybe Dwayne Turpin’s words will help them make that decision? Unfortunately, none of us know whether we or our loved ones will one day need a transplant, so let’s give others the same chance we seek for ourselves.

Click Here for more local news on the Birmingham Guide.