Memory can play strange tricks on the human mind, as can movies about memory in even more extreme ways. And taking the lead as a kind of second wave of movies about WWII by an unshackled generation of filmmakers entirely cut off from the impact of those sobering, troubled times, and free to lend alternately teasing and reverential tribute to the past, is Quentin Tarantino’s Inglourious Basterds. In other words, in Tarantino’s playful hands, WWII rocks.

Borrowing the bluster if not the basics of Enzo G. Castellari’s 1978 warsploit slaughter spree, The Inglorious Bastards,(Quel Maledetto Treno Blindato), Tarantino takes to heart – and scalp – Castellari’s flamboyant tag line, ‘Whatever The Dirty Dozen Did – They Do Dirtier.’ Playing out in Nazi occupied France, the movie stars Brad Pitt as Lieutenant Raine, the leader of a regiment of eight American Jewish soldiers dropped behind enemy lines and going undercover in often spiffy civilian spywear. A southern redneck descendant of bootlegging moonshiners and proud of it, Raine dabbles in fearless heroics, while also perfecting carving swastikas into Nazi faces. And demanding in cocky bloodthirsty mode, one hundred extracted Nazi scalps per soldier, or else ‘die trying.’ And he’s also the sort of guy who relishes chomping on a French pastry while his squad pulverizes Nazi brains with baseball bats. 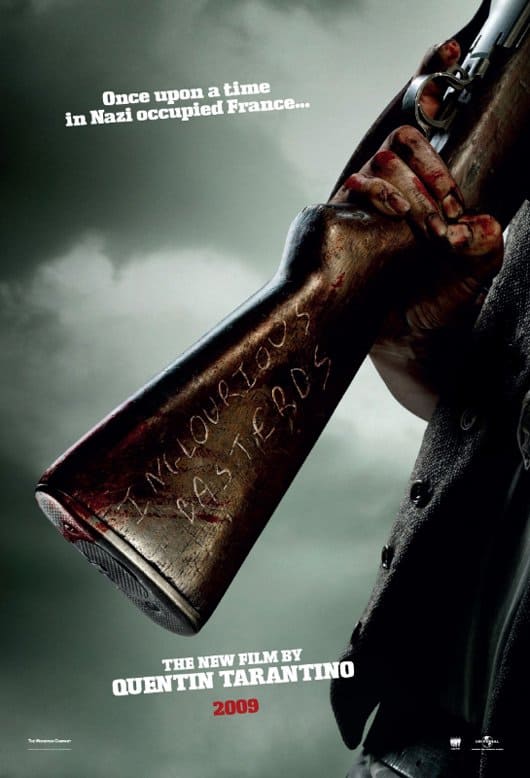 At the same time, Shosanna (Melanie Laurent), the sole Jewish survivor of a massacre led by sinister SS Colonel Hans Landa (Christoph Waltz) at the home of a countryside cow farmer, escapes to Paris where she inexplicably runs a cinema. Under an assumed identity, she again crosses paths with the treacherous Landa, who orders her to arrange a VIP premiere of the patriotic German war movie Nation’s Pride, with Hitler and Goebbels as guests. And Shosanna grabs the opportunity to arrange the incineration of the theater with the many Nazi swells in attendance, by setting on fire all the highly inflammable old school nitrate film stock stored there.

And in a parallel plot to also burn down the theater, but unbeknownst to Shosanna, is fifth columnist celebrity German movie star Bridget von Hammersmark (Diane Kruger), in league with a currently dapper, tuxedoed Raine. While a sidebar Nazi groin targeted cellar saloon shootout in pure vintage Tarantino style and bathed in bursting testicle blood, sidetracks the fiery and fabulous femme fatale in a tragic turn of events, related to her misplaced designer shoes.

Sorted out haphazardly into chapters and juggling heavily American accented foreign languages with lost and found subtitles, Inglourious Basterds’ Western European western periodically struggles for a consistent tone alternating between serious minded tragedy and satire. But a literally explosive finale titled Revenge of The Giant Face, nicely ties up the many dangling threads, while also elevating Tarantino into fresh territory as a maturing filmmaker who has lots of suprisingly profound stuff to say. That is, when the hip noir mood strikes him.