Consumers, safety activists, Big Food, biotech companies and many of the US’s importing and exporting partners have been closely watching to see if the FDA would approve the genetically engineered AquAdvantage Salmon, which it did last month. Of course unlabeled GE crops are eaten by millions and GE animals have been created to make human drugs largely under the public radar. Still the AquAdvantage Salmon is the first approved GE animal destined for the US dinner table.

The AquAdvantage Salmon is not the only GE food animal in the works. Scientists at the Roslin Institute at the University of Edinburgh in Scotland, where Dolly the cloned sheep was created, have spent years creating chickens that can be used as “biofactories” to make eggs with interferon and other disease-fighting substances. 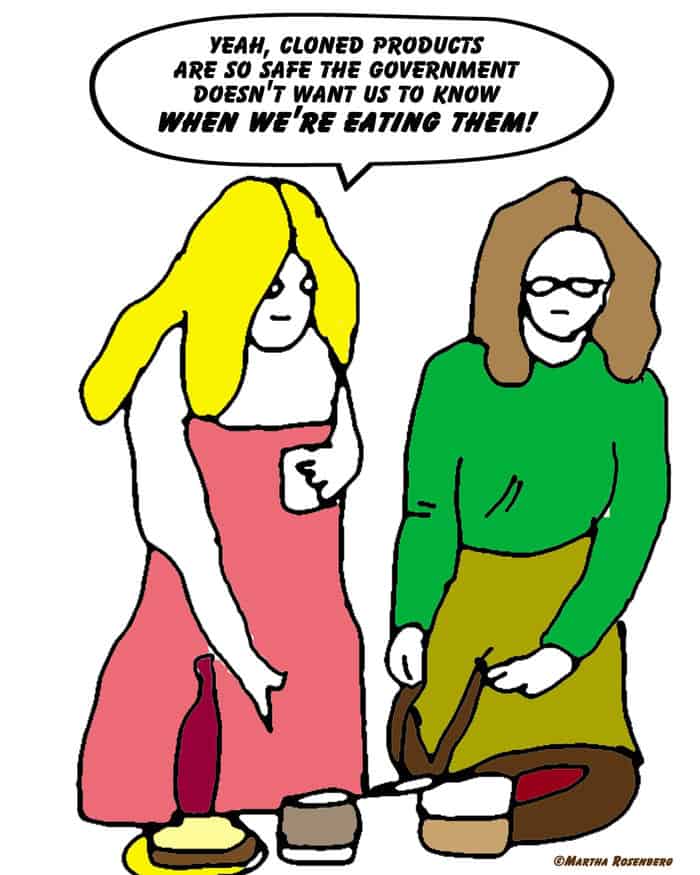 “Once you’ve made the transgenic birds, then it’s very easy,” enthused scientist Helen Sang, PhD. “You can breed up hundreds of birds from one cockerel [young male] – because they can be bred with hundreds of hens and you can collect an egg a day and have hundreds of chicks in no time.”

Other researchers are working on animals engineered to contain omega-3. Scientists at Harvard Medical School, the University of Missouri and the University of Pittsburgh Medical Center have concocted “white piglets with muscle tissue larded with omega-3 fatty acids,” say published reports. All they had to do was modify a round-worm enzyme that converts omega-6 to omega-3, inject the gene into mouse embryos to create mice that make their own omega-3, and transfer the genetic material into pigs-and voila!

“People can continue to eat their junk food,” said Harvard’s Alexander Leaf, MD about the brave new pigs. “You won’t have to change your diet, but you will be getting what you need.”

US citizens are also likely eating food from cloned animals, say many reports. The FDA ruled in 2008 that products from clones and their offspring were safe to eat and, like GE crops, would not be labeled because they are “no different from food derived from conventionally bred animals.”

The BBC has reported that cloned products have been in the US food supply for years and Jim McLaren, president of Scotland’s National Farmers Union, concurred. “If you go to the US or Canada you will almost certainly be consuming meat and dairy products from cloned animals at every turn,” he said.

Margaret Wittenberg, global vice-president of Whole Foods Market, also acknowledges cloned products in the food supply. United States customers are “oblivious” to them in the food supply, she told the BBC. “You don’t hear about it in the media. And when you do tell people about it they look at you and say ‘you’re kidding! They’re not doing that are they? Why would they?'”

Whole Foods says it bans the sale of cloned products and has a history of banning other dangerous and murky technology behind our food supply.

Like the FDA, US Agriculture Secretary Tom Vilsack sees no safety risks with cloned meat products. “We know all the research, all of the review of this [cloned meat] has suggested that this is safe,” he said during a 2010 trade mission in Canada.

You don’t have to love animals to be offended by the move toward “Franken foods.” They violate consumers’ rights to know and threaten the very balance of nature. The FDA approval of the genetically engineered AquAdvantage salmon is a case in point: AquAdvantage salmon eat five times as much as wild salmon and have less fear of predators. If they escape, are we looking at Jurassic Park?