An Interview with the “Conscience of Psychiatry” Dr. Peter Breggin

Peter R. Breggin, MD, has been called “The Conscience of Psychiatry” for his efforts to reform the mental health field. A Harvard-trained psychiatrist and former full-time consultant at the National Institute of Mental Health, Dr. Breggin has also been a consultant to the Federal Aviation Agency on the adverse effects of psychiatric drugs on pilots. Dr. Breggin’s private practice is in Ithaca, New York, where he treats adults, couples and families with children. He is the author of dozens of scientific articles and more than twenty books. In this interview, he discusses his most recent book, Psychiatric Drug Withdrawal: A Guide for Prescribers, Therapists, Patients and Their Families.

Rosenberg: Since the debut of Prozac in the late 1980s, there have been many books about aggressive “biological psychiatry” which has lured so much of the population to take psychoactive drugs. But your new book seems to be the first to address how to get people off these drugs. 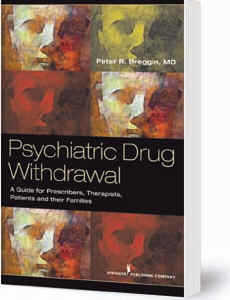 Breggin: The only other professional book I am aware of that addresses withdrawing from the drugs is Your Drug May Be Your Problem: How and Why To Stop Taking Psychiatric Medications, which I wrote with co-author David Cohen, who is a professor at Florida International University. This book, Psychiatric Drug Withdrawal, is also my first book to seek to get prescribers and other professionals to take a look at these drugs, the harm they cause and how to approach withdrawal.

Rosenberg:I would imagine that some will not appreciate the treatment model that you recommend in which the opinions of family and non-prescribing therapists are given equal weight to the prescribing psychiatrist. In a recent radio show you refer to this older, authoritarian model as prescribers being on a “medical Mount Olympus.”

Breggin: The “person-centered” approach that I propose, team collaboration with a person’s family, other caregivers and therapists, is the best model for drug withdrawal. The days of therapists seeing their job as ensuring medicine “compliance” and not venturing their own therapeutic opinions are ending. Most well-trained and open-minded prescribers now see the benefits in this.

Rosenberg:Your book shines a flashlight into the dark fears that families, caregivers and therapists have but don’t often express that if a patient is taken off their psychiatric drugs they will kill themselves.

Breggin: Yes, people are scared. But families need to know that no psychiatric drugs are associated with reduced suicidality and many have strong warnings about causing suicidal behavior in their FDA-approved labels. There is a risk of suicide when a person is withdrawing from these drugs which I discuss in the book. Too often these mental reactions are termed a “relapse” of the condition the drugs were prescribed for-when they are actually a result of the process of going through withdrawal. This is obvious because when the withdrawing person is returned to a higher dosage level, the symptoms quickly disappear, sometimes in an hour or two. These risks are why the involvement of the family and caregivers is so important.

Rosenberg:There are several terms in your book that might be new to readers: CBI, the “chronic brain impairment” that results from years of being on psychiatric drugs, “spell-binding” in which someone does not realize their true impairment on a drug as if they are under a spell and the “non-emergency principle.” The last term addresses some of the fears therapists might have when people withdraw from psychiatric drugs. Can you please explain?

Breggin: The non-emergency principle reminds therapists that your patient’s emergency is not your emergency. When you react to a person’s emotional crisis with alarm you escalate the situation-

Rosenberg:-like a toddler who falls but doesn’t realize she is hurt until she sees her mother’s face-

Breggin: Yes. If a therapist is caring and comforting, the patient does not have to end up in the ER on psychiatric drugs. When the therapist remembers the non-emergency principle and does not make the emotional crisis his or her emergency, the patient can achieve insights from the experience. But when the therapist hands the person off, he or she is reinforcing that the patient can’t be dealt with without hospitalization and drugs.

Rosenberg:That makes sense but aren’t there situations in which a therapist is overwhelmed, afraid or powerless?

Breggin: I have been seeing patients since 1968 and I have resorted to voluntary hospitalization on only a few occasions. In that same period of time, I have never had a completed suicide among my patients and only three patients have attempted suicide, two of them way back in 1968. I always remain accessible by phone and just knowing this also helps patients in an emotional crisis.

Rosenberg:You state in Psychiatric Drug Withdrawal that the epidemic of so called bipolar disorder and mania is largely caused by the drugs themselves. Certainly bipolar disorder, once called manic depression, used to be rare and was not the major disease that TV ads call it today.

Rosenberg:You give four scenarios in your book of how an inappropriately prescribed drug leads to other drugs until a person is on a cocktail of dangerous drugs for no rational reason. I think everyone has met someone who’s received one psychiatric drug and then a cascade of follow-up drugs…

Breggin: The first case is the scenario in which a child is put on ADHD drugs to which sedatives are added for sleep, then antidepressants, then mood stabilizers as each drug exerts negative side effects. The second scenario is someone whose antidepressant is followed by a benzodiazepine tranquillizer, then by a mood stabilizer, then an antipsychotic-again treating each drug’s side effects. In the third scenario, a person is given anxiety drugs which are followed by stimulants because of the oversedation and sleeping pills because of the overstimulation. Then, the person might be given Alzheimer drugs because of the drug-induced cognitive problems and diagnosed with bipolar disorder or “adult ADHD.” Finally, there are the people who suffer psychotic breaks when they are young and are put on antipsychotic drugs, likely, for the rest of their lives to which other drugs are added to treat the side effects.

Rosenberg:Some of the drugs you write about, especially the antidepressants are linked to suicide and even homicide in published reports. But you also write about subtler effects of these drugs in which people become so apathetic and disengaged, they are not present in their own life. A woman in the book did not cry the entire time she was on an antidepressant even though she had plenty to cry about.

Breggin: A universal symptom of brain injury whether from a football or other traumatic injury, drug and alcohol addiction or psychiatric drugs is loss of the zest for life and indifference toward people whom you previously cared about. Children on these drugs lose their spontaneity-that which makes them children-and what’s called better behavior or attention is actually a version of obsessive/compulsive disorder, like fixation on the computer screen. The same thing is seen in chimpanzees given these drugs-they “behave” very nicely, not trying to interact with their neighbors and not grooming themselves. Kids are made into similarly good caged animals.

Rosenberg:It is obvious these drugs and drug cocktails are a financial phenomenon, with drug companies themselves admitting their dangers once the patent has run out. What is more shocking is why the medical establishment allows what is almost a patient heist and clearly supports it. Have you experienced a backlash from doctors or Big Pharma when going up against these drugs?

Breggin: Anything you can imagine has happened to me in the four decades I have opposed the psychiatric drug establishment. In the 1980’s the National Alliance on Mental Illness, NAMI, tried to get my medical license revoked and were supported by the American Psychiatric Association. However, I had a complete victory and it led to publicizing my reform work on a new level.

Rosenberg:NAMI was investigated by Congress for undeclared Big Pharma funding. Alan Schatzberg, the former APA president, was simultaneously consultant to seven pharma companies and on Sanofi-Aventis’ Speakers Bureau, according to the APA’s Daily Bulletin in 2010.

Breggin: Yes, I was among the first to blow the whistle on what I call the Psychopharmaceutical Complex.

Rosenberg:It is obvious from your book that to withdraw people from these drugs requires tremendous resources which are not always available. In addition to the dedication and endurance of the patient, the family, caregivers and therapists will be involved for months and even years. It’s clear that patients are given drugs they cannot easily or ever quit and are not necessarily aware of this in the beginning. Though you state these alarming facts in your book, you do not seem unusually angry.

Breggin: When I was younger, I was very angry about the legions of people abused by the psychiatric profession. But the spiritual state of anger is not where I want to be and I do not wish harm to the prescribers giving out these medications. When you look at people like Gandhi, Mandela and Martin Luther King, who are my personal heroes, they present loving models who were connected to God and not vindictive. Anger keeps us rooted in ourselves instead of thinking of others, which is what I try within my limits to do.

A Guide for Prescribers, Therapists,

Patients and their Families