We learn that Steve Ruiz is the suspect in Saturday’s shooting of Steve Tausan, a highly respected veteran member of the Hells Angels. Furthermore, we learn that Steve Ruiz disappears shortly after the 1 PM killing of Steve Tausan (which was during the funeral of another slain Angel, Jeffrey Jethro Pettigrew.) Finally, we find out that the San Jose police dig up Pettigrew’s grave, when they get information that Ruiz may have been deposited with the newly buried Pettigrew.

Not even one component of these mystifying events makes any sense all by itself. But when you put them all together, you come to the conclusion, a narrative of internal politics is brewing underneath the surface of the Hells Angels, that bespeaks disruptions, change, and conflict. You never see it, but only get a glimpse of external signs that make little sense without further data.

All we see is small fragments of these internal politics, provided by brave reporters who are willing to take a chance and penetrate some of these machinations as they happen. Hats off to the late gonzo journalist, Hunter S. Thompson, who rode with The Hells Angels, and gathered information on the motorcycle club for his sensational book, Hells Angels. Much of what we know today about The Angels comes from his classic.

So, back to these strange recent developments, where did the San Jose police get a tip that Steve Ruiz had been buried in Jethro Pettigrew’s grave? This was apparently wrong anyway. And didn’t some witnesses see Mr. Ruiz spirited away in a car?

Another unusual aspect to Saturday’s slaying is the way the crime scene was covered up so quickly. There were plenty of police at the funeral, but by the time they arrived at the scene, the bloodstains had been washed away. No gun or Steve Ruiz either?

And does the shooting of Steve Tausan somehow tie in with Jethro Pettigrew being gunned down on September 23 at John Ascuaga’s Nugget casino in Sparks, Nevada? The two events must be tied together, but how? Was Steve Ruiz in charge of providing protection for Pettigrew a month ago (from the likes of a rival motorcycle gang, the Vagos)?

And why was Tausan seen indulging in a public humiliation of Ruiz, by pulling his Angel stripes off? That is, it was reported a few days ago that a witness or witnesses saw this happen, but I’m just asking the question why this would happen. Why would Tausan make a scene such as this at a public funeral for a close friend of his, Jeffrey Petigrew? This crosses the line of a long-standing ethical code of the Angels to keep the peace at such a sacred event.

And the fact that Ruiz would pull out a gun and shoot Tausan, lets me know something big was about to go down. What that is exactly, is an unknown. I’ll refer you to my earlier claim of ignorance with regards to the carefully sequestered internal politics of this motorcycle group. But just for the sake of idle speculation, did Tausan possibly suspect that Ruiz was in cahoots with the Vagos?

And did Ruiz suspect he would be killed anyway, so he retaliates before Tausan can kill him first? And why was Tausan getting death threats shortly after the death of Pettigrew? Were these threats coming from the Vagos or were they internal, from another Hells Angel? Did Tausan suspect as much? We’ll probably never know, but we can assume another weirder development is just around the corner. 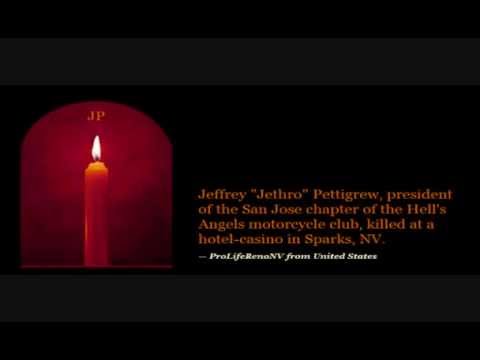