We have two suspects now in the Sherry Arnold abduction from Sidney, Montana, Lester Vann Waters, 47, and Michael Keith Spell, 22. The only problem is we don’t have any clue what evidence led to their arrest or what motivated them to do what it’s alleged they did. Rumors were even circulating it was only an accident, but that changed to an abduction and probably a homicide. Yet these reports were only rumors; nothing hard in the way of verifiable evidence.

We don’t have anything? The Sidney Police must have something, or else they couldn’t have filed a criminal complaint in the Sidney City Court. The only piece of evidence seen by those of us on the outside of law enforcement confidential information, is Sherry Arnold’s athletic shoe. And even this shoe is shrouded in mystery, since we don’t know what it is on the shoe that’s of any importance. 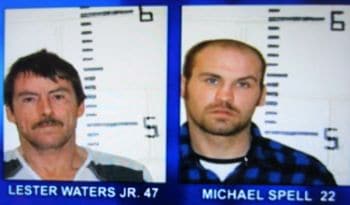 How were the police led to Lester Waters and Michael Spell? This too is a riddle. We hear they got a tip that led them to these two men, who both have criminal records that look like Chinese menus. We have to speculate they must have bragged to someone, or possibly an eye-witness actually saw the crime in progress, since the specific address is given (where Sherry was abducted) as: 900 E. Holly St.

One item we can confirm is that the transient nature of these two suspects, who have such lengthy records, and who both have been working in the booming oil and gas industry (and construction), contributed to turning Sidney into an unsafe town, whereas before it was completely safe. A criminal element has rolled into town and undermined Sidney’s small town innocence. 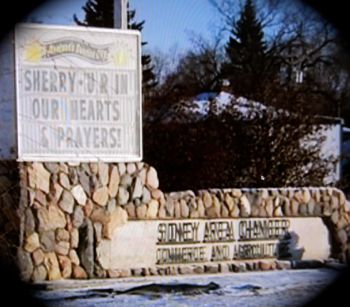 The Billings Gazette has divulged the criminal history of especially, Lester Waters, who was from Florida originally (lived in Colorado too) and loved to party. An acquaintance of Waters, Kenneth Forbes, knew him to be a big partier, but didn’t think he was violent. Kenneth added, he hadn’t seen him in seven years. Waters has served three fairly lengthy stretches of incarceration, and may have hardened considerably from all this hard time. (2 suspects come from Colorado town also known for oil, gas development Associated Press Billings Gazette)

What did these two men do to Sherry Arnold? Where did they leave her? Why did they do it? Had they been drugging and drinking on that night of January 6th? The crime happens at 6:30 AM the next morning. Were they still partying into the morning? Did they leave a trail of incrimination behind them as they fled out of Sidney? Did they stop by any liquor stores as they passed from Montana into North Dakota? Can the prosecutors make a provable case against these two career criminals? Lots of doubt! This entire story about Sherry Arnold makes us heartsick.