Have you ever hated someone before? No, I mean truly hated someone. Giselle Esteban had mentioned to a reporter with KGO-TV, shortly after Michelle Le disappeared (May 27), that she openly hated Michelle Le, since Giselle believed Michelle had come between her and her boyfriend, Scott Marasigan.

Expressing your hatred publicly is more convincing (in terms of its intensity), than just feeling some hatred privately. I’m convinced Giselle’s rage was real. What’s the trigger that unleashed this fury of hatred on May 27th specifically, when surveillance cameras caught her stalking Le at the Kaiser Permanente Medical Center parking garage in Hayward, CA.?

I found a line in an article from today’s edition of The San Francisco Examiner (Michelle Le murder suspect given more to enter a plea, by Joel Siegfried) that provides a convincing trigger for murder. “Scott Marasigan, her former lover, who fathered a child with Esteban, had taken out a restraining order against her on May 24, 2011 for stalking him, just three days before Le disappeared.”

There you go! Just imagine the rage, the passion building up inside this woman, Giselle Esteban, on a late spring day. In that same report another man, Cole Gabaldon, told a KTVU-TV reporter that Ms. Esteban had attacked him and tried to choke him last June. What’s up with this Giselle lady? One tightly wound bundle of abomination, that’s what! 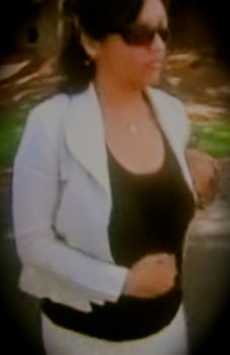 Giselle was arrested just last Wednesday morning, at her Union City condominium complex. The Hayward police had been trailing Giselle for some time, and had probably considered her as the primary suspect since day one. Even though Michelle’s body has never been found, Lieutenant Roger Keener outlined what appears to be very strong case against Giselle Esteban.

Le’s DNA was on her shoes. The athletic shoes were confiscated from Esteban’s house on May 29th, after the Hayward police served a search warrant. 2. Giselle was in the Kaiser garage (caught on surveillance footage), both before and after the time Michelle departed the facility (on May 27th, at 7 PM). 3. Both women ended up in the same spot, the Niles Canyon area of Sunol, Ca. Pings retrieved from the two women’s cell phones (victim and murderess) tell us this is true.

This fact would lead one to believe that Le’s body must have been left in this area. Searches of Niles Canyon have failed to locate Michelle’s remains so far. Le drove a 2010 Honda CRV and her car was discovered the following day (after she vanished) about a half mile from the garage. It was found at 9 AM on Ponderosa Court.

I suspect that a knife must have been employed, but I best leave it at that, before I get myself in hot water. Back in 1981 I worked in Hayward, Ca, but lived in San Francisco. This may be what caught my attention when first hearing of Michelle Le’s disconcerting story, where a former friend becomes a new found enemy, jealous, vindictive, and bent on revenge.

Fortunately for me, I got my hands on Shostakovich’s Suite for Variety Orchestra (sometimes referred to as the Jazz Suite No. 2) just a few minutes ago. This was used as the opening theme in Stanley Kubrick’s last film, Eyes Wide Shut. A passionate theme that helps me comprehend what the word hatred may mean. A contagion of hatred is a dangerous emotion that is given new meaning with Giselle Esteban.