With the most frightening FrankenStorm, Sandy, brushing up against the Eastern Atlantic coast, and a national election just around the bend, that better resembles Hagerstown Turnpike (otherwise known as Bloody Lane) at Antietam; a, oh yea, Halloween is just a few days away, so ghostly spirits are stirred up to a maximum! In October of 2005, I visited Galveston Island, a town already haunted by the memory of pirates (Jean Lafitte) who hid-out there, and by the horrible Hurricane of 1900, I dared to pay a visit to the spooky home of Samuel May Williams (1795-1858).

I studied up as much as I could on the history of the house and on the life of Samuel May Williams and his family, such as his wife, Sarah and their 6 children (who have interesting stories as well). I took a good number of photographs during my visit, but as the Captain’s Curse would have it, these ghostly pics are gathering mold in my Public Storage unit. That’s okay with me; that way they can’t scare the dickens out of me anymore! No matter, Wikipedia has a nice shot (in commons) that I’ll share with you, along with an image of Samuel May (may be a daguerreotype?), which can couple a visage with a rampage of spirit, that still whispers and echoes his secretive doings in Texas (he’s more alive now than ever!). 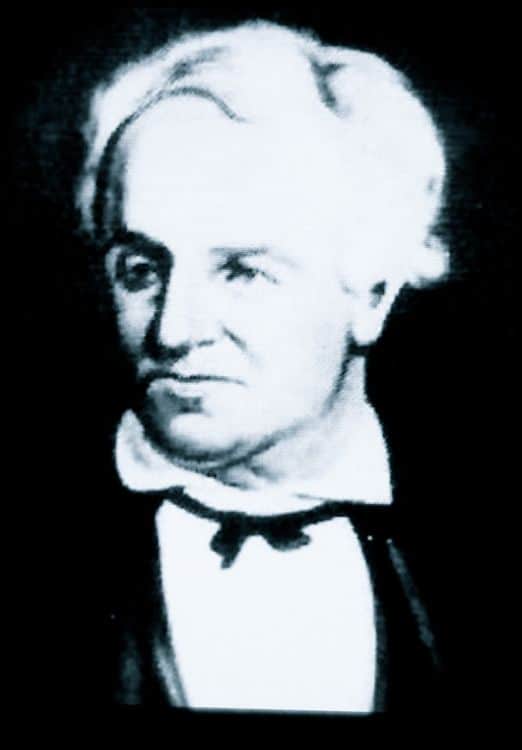 Well, I don’t mean to be spinning cotton-candy, ala lying about seeing a ghost at this old house (construction began in 1839), but the more I thought about my visit during the Witching Season of 2005, the more I was convinced, this was a Real Spook House, not a fake haunted house. Some very dark energy trickles forth from this strange abode. I stood directly in front of the house, and could feel the negative field of energy wafting through my body with hot air of ‘say bye bye boy!’ I mean, I’m being metaphorical, I didn’t literally feel hot air, just more of a negativity generating forth. That’s no ghost sighting, I’ll admit!

This morning I boned up on what information is available on the internet, regarding this little known founding father of Texas. Biographical data on Samuel May Williams is a bit sketchy, but what we can learn on the history of the house he built is impressive and much more comprehensive. You’ll have to learn as much as you can on the house, which I will suggest, was practically built with becoming a future haunted house in mind! As for Samuel, or his myth that has been passed on to us, I might suggest, was couched in a grey area of shipping mercantilism, that would probably be illegal today. This is just a hunch, but I suspect some smuggling is implied here.

Not that Williams was a pirate, or anything, but he seemed to have a monopoly on a portion of the trade that came his way; was the one to start the first bank in Texas, and may have been guilty of an age old deadly sin: GREED! He’s especially known for his parsimoniousness (stingy is probably a better word for him), which resulted in ungodly cruelty, where his bank would foreclose on anyone who faltered on a mortgage loan payment. I will suggest, the bad vibe emanating from the half Creole-plantation abode (the other half is a New England style architecture), was probably due to the grumpy and greedy, disgruntled (Samuel wants more and more money) spirit of a sea captain’s son, who’s ghost screams for more!

While I didn’t see any actual ghosts myself, you can read up on several paranormal incidents in a book by Alan Brown, The Big Book of Texas Ghost Stories, which has a small section on SMW and his (obviously) haunted house. On one occasion, even a psychic experienced fear in entering the house, since the energy was just too negative. I felt a presence of EVIL there, when experiencing the house in 2005. I betcha, the Galveston Historical Foundation was glad to get out from under it in 2007, since not that many visitors would dare pay to enter this spook house. SMW’s reputation as ‘The Most Hated Man in Texas’ is probably the reason why! It’s the only Real Haunted House I’ve encountered in my life.