Viable leads in the case of missing Tennessee mother of four, Karen Johnson Swift, are scarce. News reports from Monday (Nov 7th) cast suspicion on a neighbor of Karen’s, who allegedly poisoned two dogs (one dog was the Swift’s) and was arrested for animal cruelty. The neighbor’s name is John E. Hogshooter, 39, who may or may not have had a verbal altercation with Karen regarding her dog, who died as a result of Hogshooter’s poisoning.

While this is an interesting angle worthy of consideration, I am inclined to discount it as possibly directly related to Karen Swift’s disappearance on Halloween’s eve. Not that the lead shouldn’t be followed up on, it should be, but I’m inclined to believe it to be a dead-end alleyway. When grasping for straws, the usual theory of a serial predator seems to rear its ugly head, and so now we might place this transparency template on our overhead projector; maybe something pops up? 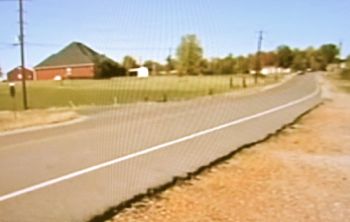 I didn’t think of the serial predator scenario all by myself. I read about it on Bill Warner’s blog or web site, pibillwarner.wordpress.com. Bill Warner is a private investigator working out of Sarasota, Florida. Anyway, his theory is brilliant, so I believe I’ll make a run with it and see what I come up with. In a nutshell, Bill ties together a number of cases of missing women (mostly with long blonde hair), where the authorities are clueless in identifying what happened to them.

I’m most familiar with the Holly Bobo and Katelyn Markham cases, then to a lesser extent, those of Lauren Spierer and Paige Johnson. The geographical region tying these women together would include: Ohio, Tennessee, Kentucky, and Indiana. The distance that separates these various cases is not so great that there couldn’t be a connection. That is, if this serial predator (killer) worked in these areas, he could have stalked these women (as time passes), and planned these crimes out methodically. 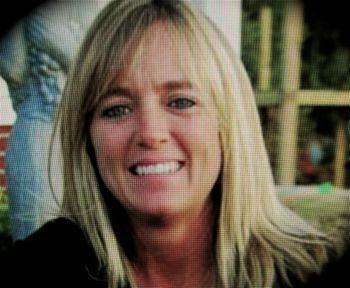 Bill Warner’s dazzling supposition is that the perpetrator is a short haul trucker of some kind. He probably has some glaring priors, that would make it easier for the authorities to identify him by. With Holly Bobo, investigators have favored the predator as a member of the local community, there in Darden, Tn. I’ve often thought, they missed their mark on that call! A short haul trucker may have familiarized himself with this rural Tennessee area, just as he could have with the northern Tn. region of Dyersburg. 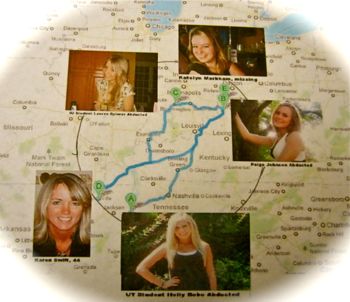 With Katelyn Markham, the focus has been on the boyfriend. But a serial predator is a much better fit, now that I think of it. What I see, is a striking similarity in appearance between these 5 women. With that in mind, it seems likely that this sick individual targeted these particular women because of their physical features. Another commonality is many of them disappeared at an odd hour of the morn!

That should be examined, and another coupling factor just hit me hard (maybe I read it already?); what about the missing cell phones? This creep confiscates these women’s cell phones. Why? This angle needs probing. Study Bill Warner’s map, with pix of the ladies. *(I’ll include a crude pirating of the map for you, but I want you to read Bill’s piece and study this ingenious diagram. The Quad-State region of the southern/midwest sector of the U.S. forms a circle! Bingo!)

The problem is that when you study each of these cases separately, you hit a dead-end road. When you put them all together, it begins to make much more sense. Thank you Bill Warner! (May need to use your P.I. service sometime.)