When the Queen, Camilla and Carol were forced to stand together for a few minutes at the recent nuptials, the atmosphere was clearly strained and hardly a word exchanged. Grandma, of course, has never had to master the art of small talk as it’s always been a case of she-who-must-be-entertained, but step-mother is a well seasoned social butterfly who could easily have put the mother-of-the-bride and outsider at ease with a few warm words. Obviously, however, this aristocrat doesn’t possess the class to do the right thing which is not only rude, but also made the millions watching aware that the svelte matriarch of the Middleton family is obviously bothering the porked-up Duchess a lot more than she would care to admit.

Much has been made of Mrs Middleton’s humble roots, and her family’s rise to the nouveau riche, but it’s how she actually got there that might undermine those who have never experienced success of their own. Everyone has great ideas, but less than one percent of people have the drive to execute them, and only a tiny percentage of those are smart enough to become an enduring financial success. Not only is Mrs M a part of this elite, but she was the one who first made and sold the party items that created the multi-million pound empire, which places her above even most business women, and on a different planet to someone whose only achievement is to have had sex with two extremely wealthy men. 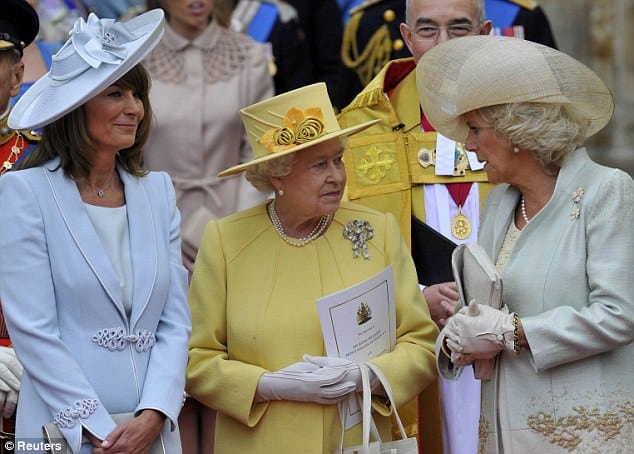 On that subject, Carol’s matrimonial success might well be an added irritant to those whose marriages have ended up in divorce. Rags to riches all too often have a domestic downside, with husbands buying themselves an inappropriately aged piece of totty and leaving the tried and tested far behind. But this has not happened to Carol, who is also happy to keep the wedding vows she made all those years ago and whose wholesome family is still very much intact. As Camilla knows, if there had been any skeletons hanging around, the press would have smoked them out by now and the fact that Carol has not been bitten on her perfectly toned butt may well be another reason HRH had little to say to the lady with the great bones.

Social mobility is not mobile at all when it comes to royalty, and it’s doubtful the two sides of the family will meet again until the first christening, which leaves Camilla plenty of time to join Weight Watchers and get down the gym if that’s going to make her feel good enough about herself to behave with a little more grace. And when she’s about to meet William’s in-laws again, she should perhaps remind herself that she’s already only tolerated by a British public who have taken the Middletons firmly into their hearts and who saw the snub, giving traction to the thought that Camilla’s the one who saw off a princess, and Carol who made one.