NewsBlaze News
Home Thoughts Opinions What’s Behind TIME’s Choice of Barack Obama as Their Person of the...

TIME has chosen President Barack Obama as their Person of the Year for 2012. This choice doesn’t come as much of a surprise to me, but I was nonetheless curious as to what reasons were cited by the Time staff writers. I carefully read, several times through, the thoughtful piece, 2012 Person of the Year: Barack Obama, the President, as well as a sidebar piece, The Choice: TIME’s Person of the Year, which seems to explain why Obama represents the New American.

Oh, don’t miss a careful examination of Nadav Kander’s photographs of the President, which look more like Rembrandt oil portraits to me. Furthermore, there’s something about the photo of Barack and Michelle embracing, which is the most tweeted photo ever. As far as what’s behind TIME’s choice, as the primary lengthy article for your consideration, I dare not unwrap it for you here, but just to say it explains how and why he won re-election, and it projects what’s on the horizon for his second four years. 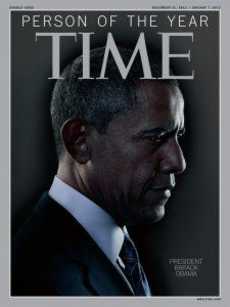 An obvious plus for the President, is he surrounds himself with some really talented people, in a category of what I’ll call ‘Modern Politics Ala High-Technology.’ I’m still trying to understand how they did it, where Obama won by more than 5 million votes. Florida going Blue was the biggest surprise for me and I understand, it surprised the President as well. While I don’t claim to quite understand it, I do know it has to do with geniuses in statistics, as applied to political science, where precision number crunching can produce positive results, undeniable math that adds up to victory!

Okay, so I followed New York Times’ political statistician, Nate Silver, religiously during the election, as if he was a modern day Nostradamus (in hindsight, Silver was the reincarnation of such a soothsayer). Yet this is not all cold calculations; the Obama Team really believed in their man, and he reciprocated in his appreciation of his staff, who fought long and hard and zealously smart. Many common citizens joined in with the Obama Team, using Facebook and Twitter to make people aware that Obama is our man, and deserved four more years to finish the job he began back in 2008.

Well, most of the credit has to go to Barack Obama himself, who seems to define and represent what the new electorate (or the New American) looks like. He and she have changed tremendously from when I was growing up. I knew precisely who the New Americans were, as I watched on TV the arduous lines of eager voters waiting out their chance in South Florida. Women, Gays, African Americans, Latinos, Asians, and young people make up the majority now; Obama represents these New Americans and will fight hard for them!

Our country has completely changed and I believe it’s for the better; I know for sure, it will never change back to what it was before (thank God)! Now, what will happen over the next four years? What place will Barack Obama take on history’s stage? Will historians give him a good report? For the immediate future, we have a greater tax on the rich, improvements for a dwindling middle class, much needed gun control legislation, addressing environmental issues, immigration reform, making college more affordable, and improvements in our broken-down voting apparatus.

Can Obama accomplish all these goals? Probably not, but just by putting a dialogue in place before the American people, may be good enough to forge his legacy as a great president (as pointed out in the TIME piece). Obama’s main mantra has been CHANGE, and this is exactly what the US wants, and it’s exactly what we’re getting! The NRA represents the past, not the present or the future. Long voting lines in Florida represent the past; not the way it should be. Wealthiest Americans having all the tax breaks has to be passe, and will be passe anytime now. Thanks Obama and thanks TIME, for a wise choice!