NewsBlaze News
Home Thoughts Opinions The Dream is Now a Reality: One Nation Under Obama

I never thought this would happen, Obama for President. The fact that now that the elections are over I don’t know what to say. I think that us media folk have been so locked into who is bashing who and bashing the who that bashed you for bashing them in the political arena, that we don’t know much of anything else anymore.

Is Bush still in office? Have the Cubs won a series yet? I feel a little out of touch, I am a little rusty at this, but here we go. Ok, so Tuesday night was the result of two years of following a thought and dream and it has become a reality, for both parties.

Whether you wanted Obama or you did not want him, we have our countries new direction and a leader to take us there. The most important job now for us Americans is to follow through with this plan that is now in motion, because we are the momentum.

Folks are already asking me if I think that President Obama will provide relief in the economic crisis. I say to you all, that Obama IS the best possible stimulus plan we could have right now.

Now, during the elections Democrats in numbers had said that they were going to pack up shop (what was left) and move to another country. Republicans said that no matter what they would just sit tight and watch the democrats foul things up.

So, now that things are over and nobody’s going anywhere and President Obama will probably need to remodel a little. Maybe start with a fresh coat of paint, a good house cleaning as well as refacing the cabinet. I know the big media push now is to see what TV news folks will get the jump on who Obama will pick for this cabinet of his.

The idea is to pick it as quickly as he can as to not under mind the power he has worked for in the last two years. I will make a guess that this cabinet will be young and filled with a little Hollywood. Like: Oprah, Senator Richards of New Mexico, Colon Powell, Arnold Schwarzenegger for a little power or . . . energy, hmmm.

Tuesday night I ended up at the Obama camp in Arizona to see the speech on TV and to see everyone of race, color and creed breath a big sigh of relief. For the first time in my life I walked down the street and said howdy to folks like I normally do, but when I walked by a group of African Americans ” (Doesn’t that seem so formal now), I said hello and for the first time I did not feel like I was carrying the blame of 200 years of slavery and oppression.

My fellow Americans I say to you that the glass ceiling has been broken and last night was an icebreaker to all our fellow Americans. We can now hold our heads high and say once again we are proud to be an American. Oh, and from here on in, I am going back to being a humorist and not an Evangelist, Amen brothers and sisters. 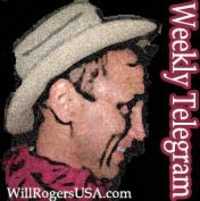