The BDS (Boycott, Divest, Sanction Israel) movement is fertile ground for anti-Semitism, the world over. It is using the very same practices Hitler’s Nazi propaganda master Joseph Goebbels used and its ultimate goal is to delegitimize Israel and demonize Jews so they are loathed and are targeted for hate crimes.

In Washington, lawmakers in both chambers of Congress introduced bipartisan legislation boosting efforts at the state and local levels to combat economic warfare against Israel. The bipartisan bills – sponsored by, non-Jews, Mark Kirk (R-IL) and Joe Manchin (D-WV) in the Senate, and Juan Vargas (D-CA) and Bob Dold (R-IL) in the House – under the title “Combating BDS Act of 2016,” inter alia, protect state and local governments’ right to disassociate pensions and contracts from entities that boycott, divest from, or sanction Israel.

My question is, where are the Jews, members of congress, who should have been the ones to have introduced an anti-BDS bill?

Illinois was the first state in the nation to enact a law to divest public pension funds from companies that engage in BDS. Other states have already followed in Illinois’ footsteps and have passed such a law and other states are working on doing the very same.

In California, there is a proposed state bill AB-1552, which Legislator Travis Allen, a non-Jew Republican for the California State Assembly from Huntington Beach (District 72) announced in November 2015 introduced on January 4th 2016.

According to Mr. Allen, the vile BDS movement, “use(s) false, demonizing, and delegitimizing propaganda against the State of Israel.” If adopted, AB 1552 would prohibit state-run government entities from doing business with companies that engage in boycotts with a “person or entity, based on the race, color, religion, gender, or nationality.”

Pathetically, AB 1552 has not yet become the law of California. Reason, the California Legislative Jewish caucus have been the obstacle to the bill being passed into law.

Assemblyman Richard Bloom, District 50, Democrat and a member of the Legislative Jewish Caucus, was originally a joint author with Mr. Allen on AB 1552. He has since taken his name off the bill and decided he wants to be in charge of his own anti-BDS bill, AB 2844. Mr. Bloom is using, verbatim, AB 1552 language, has plagiarized AB 1552 and wants to have the credit all to himself. He has the support of the Jewish Caucus, some of its members do not even want any anti-BDS bill. AB 2844’s goal is to kill AB 1552, the only bill that will be effective to yoke the BDS. The intention of the Jewish caucus renegades is to water down what was AB 1552 so it has no teeth and effect, but they know that as long as AB 1552 is alive, people can always jump ship and join in support of AB 1552.

The Bills and a Letter 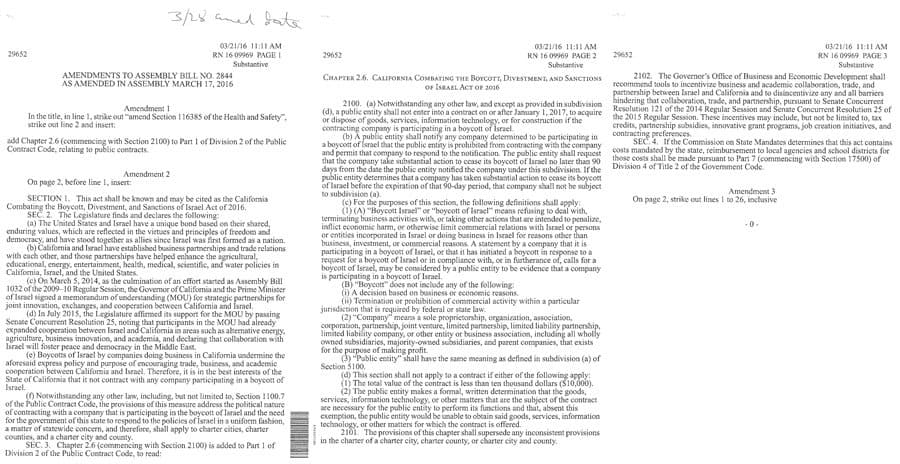 The Jewish caucus was formed in 2014. Where were they not first to introduce the anti BDS bill? What have they done so far? Instead of thanking Assemblyman Allen for doing what should be expected of them, to defend the Jewish State or others suffering under intolerant boycotts? Why are they taking other people’s related work and watering it down? This is daylight robbery and should be treated as such.

The Jewish Journal published this article, reporting that the Jewish Democrat withdrew joint authorship of the Republican’s anti-BDS bill, and plans to introduce the same legislation. It well describes the shenanigan the Legislative Jewish Caucused has thus far pulled off.

The actions of the Legislative Jewish Caucus can be seen as anti-Christian bigotry because a Christian, a Republican, introduced AB-1552. Is it that in the eyes of the Jewish caucus Christians are not good enough to introduce such a bill that defends and protects Israel and others suffering under boycotts? Is it that according to the Jewish caucus in California Christians need not apply to protect Israel? With their actions the California Jewish caucus are discriminating against those trying to protect the Jewish state and they are using plagiarism and theft to do it.

So let us see how Christians do care for Israel’s wellbeing. The best example is CUFI (Christian United For Israel), an organization that has more than 2 million members, all of whom vehemently support Israel. The organization has poured millions of dollars into Israel to help the state, unabashedly supports Israel in the US congress and each year holds a ‘Night to Honor Israel’ in tens of USA cities.

I now question, loudly, whether the California legislative Jewish caucus members really understand what it means to be Jewish.

I am personally furious about the events taking place, caused by the California legislature. I want AB 1552 passed with the support of everyone in Sacramento. I am now asking every person who understands what is at stake to get behind Assemblyman Travis Allen and his bipartisan AB 1552 so it gets passed into law as it should.

We must be the rock and keep on fighting to win.