The Religion of Power’s Leader, Prophet – King Nazir Muhammad has today introduced to his followers a new line of T-Shirts.

Shockingly this line of shirts has a unexpected slogan which reads “May Allah Bless America,” which is unusual in this anti-Islamic climate.

King Muhammad, being known as the lesbian messiah, has also created a T-Shirt that promotes his god’s support for lesbians. You can view and order this first line of products by King Muhammad online at shop.spreadshirt.com/1098433/ 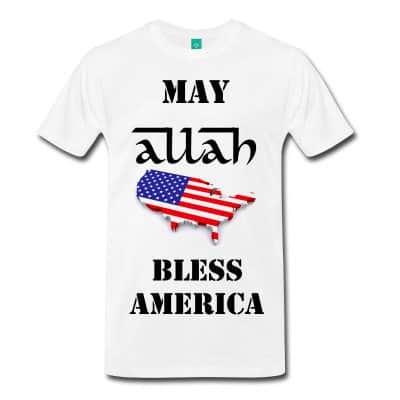 But for those that are familiar with America’s Prophet Muhammad, he is promoting another form of religion which is pro-America. The religion of power, as it is called, has nominated America as the holy land, and the state of Florida as “the new Mecca.”

Created For God or For Money?

Many critics are skeptical as to King Nazir Muhammad’s intentions in creating this new religion. Is it to better Islamic/America relations or is it strictly to make money ? As time goes on, we will see if Muhammad’s experimental religion will catch on with its target audience.

Insulting or Good for Public Relations?

But for now, these T-Shirts seem to be a good way to spread Muhammad’s goal of making Allah acceptable in America and curing Islamophobia. Or maybe it will just anger the Islamic world, or be used as it should to ease the American people’s hatred or misunderstanding of the religion of Islam.

America Has Their Own Prophet Muhammad

We must also note that Muhammad has repeatedly stated that he is NOT a Muslim and that his religion has NO association with the religion of Islam. So anyone interested in purchasing these products is in no way supporting Islam. You can read more about this religion and its Ministry of Good Fortune at Muhammad’s online temple so that potential buyers wont feel as thought they are being unpatriotic.