Here we are, over two weeks since the invasion of Costa Rica by the US military began, and the Internet is abuzz with hostility towards both sides. Costa Rica for permitting the US invasion and the United States for, once again, sticking their noses where it does not belong.

As I mentioned in my previous article on the subject, the USA and Costa Rica both have ulterior motives behind this decision. But what could they be and has the fog settled a little so we can see tidbits of the truth shining through?

When both countries announced that the United States would be deploying 46 warships, 200 helicopters, over a dozen harrier jet fighters and 7000 marines to Costa Rica, the world spoke out on the subject. No matter the language you speak, the math just doesn’t add up to anything other than “excessive” relative to the problem. You see both countries are claiming that the US military is coming, guns cocked, to help the fight against drug traffickers.

Jet fighters for a maritime mission? 46 fully armed warships to catch speed boats carrying drugs up the coast? 7000 marines to “assist” national police and coast guard? According to the Costa Rica news, the US is here to help with the drug trafficking coming through the Caribbean and in to the Gulf of Mexico. Then why are they based on the Pacific Coast of Costa Rica? And how about the DEA (Drug Enforcement Administration)? Is a mission like this one not more within their line of responsibility rather than militarizing an otherwise peaceful, non-military bearing country like Costa Rica?

However on the other side of this controversial coin, there is the fact that there is a lot of truth to the rising drug related crimes in Costa Rica. This is something that can not be ignored either. Over the past few years, Costa Rica has seen a steep rise in drug related crimes and is in certain need of some assistance within this area. 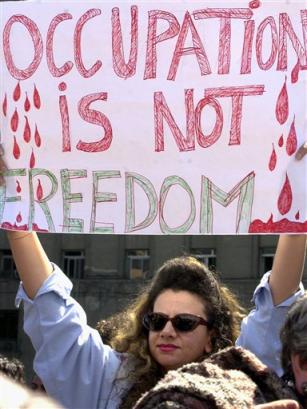 Imagine what this could mean. Soon Ticos could be enjoying their liberty fries and RFID chips while chatting it up on an AT&T subsidized iPhone 4. Oh the possibilities.

There are enough theories out there to make your head spin. Some even include a theory on the BP oil spill creating instability on the North American tectonic plates and creating catastrophic earthquakes and other natural disasters. In response, NATO has ordered the US military to the safe waters off the coast of… you guess it… Costa Rica.

There is also talk of Chavez in Venezuela and his Russian pals who continue to help those evildoers in Iran. Oh yeah and we can’t forget the Sandinistas of Nicaragua led by Daniel Ortega, arch rival of the US since the US “occupied” Nicaragua in the 30’s.

If you dig deep enough you can even find excuses for the deployment stemming from fear of civil war in the US after the full extent of the BP oil spill is revealed.

One thing is for certain. This contradicts what Costa Rica law dictates and also goes against their constitution. But then again is that not what the US Patriot Act did when it all but abolished all civil liberties within the United States? Maybe this is just part of becoming “Americanized.”

Whichever reason suits you, the bottom line is the whole deal stinks of corruption from both sides and as we move ahead, all we can do is sit back and watch with hopes that someday, we might just know the truth. However I doubt it.