Sometimes, life makes you laugh, and sometimes it makes you cry. Sometimes, you don’t know which you should be doing, perhaps both at the same time. Conservatives said all along that Obamacare was a mess, and of course, you would expect that, because it was Democrat-conceived and Democrat-written. Conservatives were not given any chance to take part in it.

The Obamacare law is so bad, so tragically ill-conceived that you want to laugh, but sadly, it is a danger to our American way of life.

In 2010, the dark comedy “Rebels Without A Clue” could have been inspired by the mess that is Obamacare. Obamacare backers still want the law to go ahead, but anyone looking at it objectively would have to say it isn’t likely to work out well.

High Opposition To This National Law

Unsurprisingly, a new poll says a whopping 60 percent of Americans need “more information to understand Obamacare,” while more than 50 percent of that 60 percent oppose Obamacare, outright.

In the history of the United States, there has never been this level of one-sided data on a national law.

Obamacare-mandated healthcare exchanges are scheduled to open in less than two weeks. Assuming a miracle occurs, seven million uninsured Americans will have coverage by the end of March, 2014, but the recent Washington Post/ABC News poll show 62 percent of those polled that are part of that seven million, have no idea what these changes mean.

More than half those opposed to the law actually support shutting down portions of the federal government to stop it.

On Friday the House voted to defund Obamacare, while allowing other federal agencies to remain open. That move, if approved in the Senate, would avoid a complete shutdown when the new fiscal year begins October 1st. 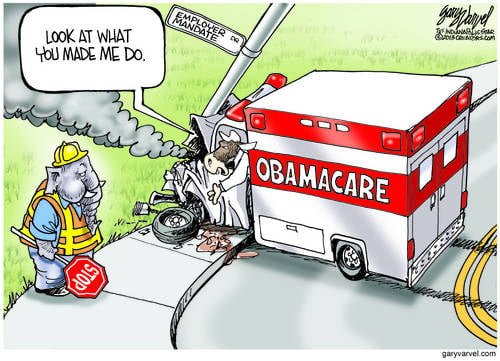 October first is also the day the healthcare exchanges are scheduled to open. Considering that about half the people it is intended to help are likely to be completely clueless about it, this could be a complete debacle.

The Washington Post/ABC News poll concurs with the uncertainty shown up by other polls related to the Affordable Care Act.

Fox News published the results of their own poll on Tuesday, which shows almost 70 percent of voters are deeply concerned about their personal healthcare. The Obamacare changes are looming over them like a nasty black cloud, because the government has completely failed to provide any real, actionable information to individuals.

Backing up the polls, showing uncertainty, a Pew Research/USA poll clearly shows that Americans have little idea how the law will affect their families. Again, a vast majority of those polled disapprove of Obamacare.

The White House had an almost inexplicable response. They said the confusion is “understandable” since specific information will not be available until open-enrollment begins October first, according to The Washington Post.

This is the law that Nancy Pelosi said they had to pass, more than three-years ago, so they could learn what was in it. It is also the law Americans must comply with, so they know what the effects on their family will be.