‘Tis the season to be jolly, to be getting some last minute work done, to get all your shopping done and to be getting ready for the New Year and go deep into debt. How’d the jolly part get in there anyway?

Now, normally all of us working folks are the ones getting things accomplished during this season of lavish spending. It is a tradition that Washington is just that, a WASH, when it comes to working this time of year, as we have heard from Senators, Kyle and DeMint. But this year the President and the Mighty Lame Duck Congress is redefining politics as we know it by… well, getting something done, working. 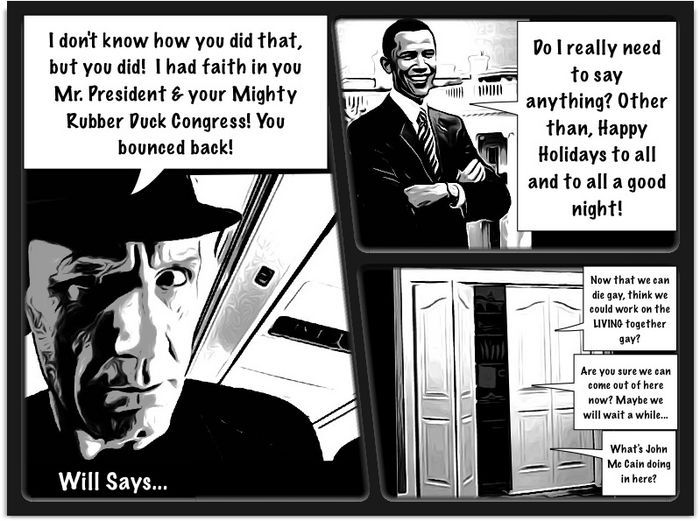 President Obama is making old Saint Nick look like a slacker. In the past few weeks he has brought us DADT (as of today, signed, sealed & DELIVERED!), tax cuts, unemployment relief and it seems like he might have a few more things wrapped up by Christmas.

Of course we’d hate to be negative this Christmas season. But, Santa has promised the boys and girl presents before and not delivered them. If Santa can’t deliver on his promises, what makes us think our President can deliver? I guess we will just have to wait to see whether Mr. Obama can deliver the goods he has promised us.

Of course, the biggest stumbling block that O Saint Bama has been facing is not the holiday weather, it’s not the lines at the stores, but rather the Senate Republicans. They have been stopping instead of STARTING. They did not ask, did not tell us anything helpful about working together, and not really lending a helping hand when it comes to response to the American people who were giving more than a hand on 9-11/2001.

Yet, the President has forged through with the help of some of his elves (Harry Reid) and instead of his band of reindeer. He has his Mighty Lame Ducks. Of course, it ain’t over till it’s over and politics has away of changing its stripes to checkers and checkers to spots. Am I giving the impression that politicians are chameleons? It’s just that these Congress and Senate folks are as unpredictable as a kid in a candy store for the first time. They tend to hold their breath and stomp their feet when they don’t get what they want. However, that screaming little boy (Republicans) did get that BIG allowance (tax cuts for the rich) he was holding out for.

A few things might be left under the tree this year. Matter of fact, they may not even make it in the box to begin with. The START treaty, we are hearing that some of the Republicans are saying they have not had much of a chance to really read it. Now folks, this treaty is pretty straightforward. It’s a piece paper that let’s each side know if the other STARTS chucking things at the them.

We will know how many they chuck and what it is they’re chucking. You know, the treaty in this case really is just another way of saying, “We’re watching you boys in Russia.” But here’s two words that might help push any of you START non-believers over the fence. North Korea! Kim Jong-il is a great poster child for the reason that we should have a treaty like this in place and although they may be on the way to only having a few arms to hug and hold us… How many nukes do you need to ruin someone’s day?