Actually, a better label for the guy would be “a sad by-line…”

If you haven’t heard about this, recently a young man went to a movie showing the newest Batman movie, he left after the first ten minutes. He then returned in full riot gear, with an AR-15, a Remington 12 Gauge, and a Glock .40 cal. threw in smoke grenades, and proceeded to open fire on the audience.

While I know it is the nature of the media to want to sell papers, and so sensationalize, it is a new low to give the murderer the name of a hero, just because he decided to shoot up a movie where they were showing “The Dark Knight Rises.” Just because you want to sell some papers, or get someone to read your newsfeed, does not mean you should paint guys like this as anything other than what they were… Likewise, to call him the Joker gives him too much credit for what he really was.

In a CBSnews.com article it states, “According to the University of Colorado, Denver, Holmes was in the process of dropping out of the school’s graduate program in neurosciences.” Michal Carriagan, the chair for the University of Colorado’s Board of Regents said that Holmes had dropped out in June. Mr. Holmes had been studying “neuroscience” at the schools Anschutz Medical Campus. 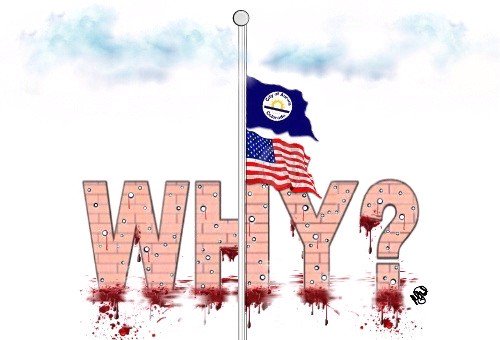 This is “experiential data.” I was a Molecular Biology/Microbiology student at one point, in my collegiate career, and by the time I’d completed enough courses to have 2 Bachelor’s degrees, but not the one I was trying to get… I realized I was at a math bottleneck and there was no way I was going to be able to progress where I wanted. So I understand the tremendous stress a student can find themselves under. I want you to understand this too.

I am not saying this to justify this guy’s actions, but the fact is you should know if you enter in the Google search: “Med School Mental Breakdown” you get 2,030,000 results. This said, while attending school we had more than one teacher that thought that it showed off how brilliant they were if they could figure out a way to be the “hardest teacher, with the toughest tests.”

We had teachers that would assign students the wrong material just so they could perpetuate this. Did this reflect brilliance, nobility, or integrity? No, it really just showed us the kind of egos, and selfishness we had to look forward to in our future profession. People that cared less about teaching and more about ego and their own reputations.

Again, I’m not even trying to justify what Mr. Holmes did. However, I am trying to give you a perspective, of an inkling of the amount of stress a med school program creates, and I was only a pre-med student at the Bachelor school level.

The next thing I want you to consider is that the average medical school student finishes school with $200,000 in debt; a debt that will put a strain on them, their family, and possibly follow them for a long time.

I mean if you fail out of med school, you’re not going to have the same resources to repay that money that you would, had you finished med school, and even then… it wasn’t going to be easy. Ironically, only about 4-6% are said to drop out of med school in the first year, 2-3% the second year, and after that… It’s almost unheard of, and often when a student is failing they still have the option of the Caribbean.

A Point of Irony

If Mr. Holmes watched more of the movie than the first five minutes, a thing repeatedly stated by the real “Dark Knight,” was that anyone can be a hero, anyone can put on a suit, or a mask and do good things. It also had the age old theme of… Just because you’ve been defeated, you don’t just give up.

Mr. Holmes was defeated by life, by med school, and most importantly by himself… Consider… What do you call the guy who drops out of med school and goes off to the Caribbean? Only to score the lowest grades in his med school class?

It is understandable if you realize you cannot do something, and have to quit and move on, but obviously Mr. Holmes found this condition unbearable. However, unlike Batman, he chose not to act like a hero, and strive to do something better or greater with his life. It is for this reason I request that you call him something else that speaks for what he truly was.

A disappointment, a sad by-line.

We all fail life’s IQ test from time to time, and I truly doubt Mr. Holmes will be mentally or emotionally brave enough to understand what he has done. I could go more in depth talking about the guy’s booby trapped house and his life, but… I truly don’t see him having the maturity to accept what he has done, and considering that he will spend the rest of his life in jail or be executed… do we really need to read more about this guy?

The people I feel need others the most, are the survivors and the families of the 12 people who died during this horrible tragedy. The latter, I have to believe that they are out of pain now. However, their friends and family have a long road, and it most likely won’t be an easy one. What I can say to those folks is… I understand what it is when someone you love is murdered. I know you don’t know me, and have no reason to believe me. Likewise, I know there is very little comfort others can give you in the next short period of time, other than just to be there, and… there will be a lot of folks who you won’t want to be there.

Just remember it will be tempting to embrace rage rather than do something heroic. That is what this guy did… He took an easy, cowardly, ugly path… The folks you love, and have loved deserve better than that. I know you will make them proud.