The United States was a Superpower. That was until George W. Bush and the Congress went into a fight and stayed far too long. The episode showed that the US could be defeated, using its own civility, press and people against it.

People around the world lost faith in the US. Now it is too late to learn that the threat of a crushing blow is more powerful than implementing it poorly. If that wasn’t bad enough, Obama made it much worse, virtually telling disgruntled populations all over the world that they could get rid of their governments, and the US would back them.

It wasn’t true. When it came to that backup, people very quickly found Obama was a toothless tiger, who couldn’t make a decision and did not have the backing of the Congress to do what he said he would do.

That is the peril of making up foreign policy on the fly, thinking and acting like a dictator, without understanding the limits of the presidency. Strange, considering Obama said he was a Constitutional Law professor. What was he teaching students?

The situation in Ukraine has the United States and its allies virtually handcuffed due to four things – incoherent foreign policy, strength of the opponent, geography, and sphere of influence.

Geography is not a problem in the case of Venezuela. In our own hemisphere, America still carries a big stick. Or does it? Perhaps that stick is all in the mind of the clueless. Florida Governor Rick Scott repeated calls for the Obama administration to consider sanctions against the Venezuelan government. It was the same thing he called for at the National Governors Association meeting in Washington D.C., according to The Miami Herald.

Giving Obama a push to do something about Venezuela, Scott wrote this to President Obama, “We must target regime officials with sanctions, such as freezing the bank accounts of President Nicolas Maduro and his gang and revoking the U.S. visas of anyone involved in attacking peaceful demonstrators. We must stand squarely for liberty and democracy and against the forces of oppression and tyranny. It is also my hope that you will use all diplomatic measures to denounce the unjust arrest and treatment of the peaceful pro-democracy leader Leopoldo Lopez.”

Using the same teleprompter speech as used for Ukraine, Obama called on Venezuela to release protesters detained in anti-government demonstrations, and to address the “legitimate grievances” of the country’s people.

The Venezuelan government expelled American consulate officials and the US retaliated by expelling three Venezuelan diplomats Tuesday, according to a report in The Hill.

It seems Venezuela doesn’t care to listen to what the US has to say about its internal issues. 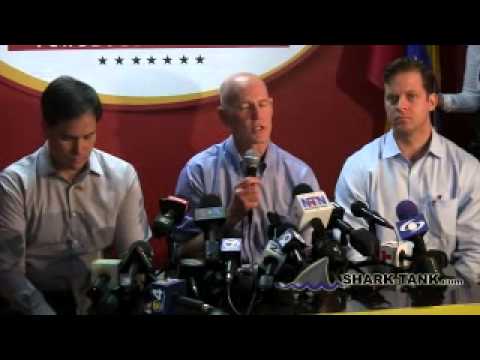